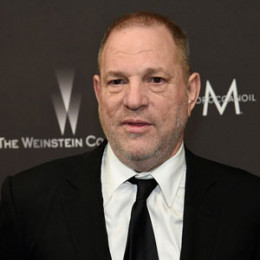 Controversial film producer, Harvey Weinstein co-founded the entertainment company titled, Miramax along with his brother, Bob Weinstein. The company has produced several independent hit movies including- Sex, Lies and Videotape, Pulp Fiction, and Shakespeare in Love among others.

In 1997, the Weinstein brothers left the company and formed a new company titled The Weinstein Company. The company received 341 Oscar Nominations and won altogether 81 Academy Awards.

As of 2017, most of the celebrities made sexual allegations against him. Some of the actresses even claimed that he tried to rape them. After such news, he was dismissed from his company and expelled from Academy of Motion Picture Arts and Sciences.

Harvey Weinstein was born on 19th March 1952 in New York City, New York under the birth sign Pisces. Weinstein is American by nationality and belongs to Ashkenazi Jewish ethnicity. He is the son of Max Weinstein (1924-1976), a diamond cutter and mother Mariam Weinstein (1926-2016). He has a younger brother, Bob Weinstein.

Weinstein attended John Bowne High School and later graduated from the University at Buffalo. During his sophomore years, he was awarded the honorary degree of Doctor of Humane Letters(DHL). In the 1970s, he along with his brother Bob and Corky Burger produced a rock concert independently as Harvey & Corky Production in Buffalo.

Harvey Weinstein developed passion in films from an early age. Hence, to pursue his interest, he along with his brother created a small independent film distribution company, Miramax by using the profit from the concerts of the 1970s. The company was named after his parents, Mariam and Max.

In the 1980s, the company released their first concert film, Rockshow by Paul McCartney. In 1981, Weinstein produced his first movie, The Burning directed by Tony Maylam.

Their company became one of the successful studios in America, after making arthouse film with the release of their 1989's the drama film, Sex, Lies, and Videotape which became the huge hit. Some of his movies- The Cook, the Thief, His Wife & Her Lover and Tie Me Up! Tie Me Down, on the other hand, received X-ratings from MPAA and were banned nationwide. Weinstein also sued MPAA for the rating system but the case was thrown out.

After the success of their 1992 movie, The Crying Game Disney offered Weinstein brother $80 million for the ownership of their company, Miramax. The brothers signed the deal but remained head of the company. After numbers of hit movies and series, the company won its first Academy Awards in 1997 for the movie, The English Patient.

On 30th September 2005, the brothers left Miramax and created their own production company, The Weinstein Company with several  A-list directors including Colin Vaines, Quentin Tarantino, and Robert Rodriguez among others.

Some of his hit movies that are nominated for various prestigious awards include Django Unchained, Pulp Fiction, The King’s Speech, Inglourious Basterds and The Artist among others. After such blockbuster movies, the company received 341 Oscar Nominations and won altogether 81 Academy Awards.

The most controversial person of 2017, Weinstein has also worked for top-notch fashion labels. He produced Project Runway making stars of designers including- Michael Kors, Heidi Klum, and Nina Garcia among others.

Harvey Weinstein has been nominated for various prestigious awards and won some of them.

Some of his other nominated awards including, Primetime Emmy Awards, BAFTA Awards, ACCA and Oscar among others.

In 2004, he was appointed an honorary Commander of the Order of the British Empire. In 2012, he was also made a knight of the French Legion of Honor.

Harvey Weinstein has been married twice. Weinstein married his first wife, Eve Chilton, his assistant way back in 1987. The couple shares three children, Remy, Emma, and Ruth Weinstein together. The relationship between the couple did not last and divorced soon in 2004.

On December 16, 2007, Weinstein married for the second time with Georgina Chapman, English actress, and fashion designer in a lavish ceremony at his waterfront Connecticut estate in a star-studded ceremony including Jennifer Lopez, Marc Anthony, Noami Watts, Cameron Diaz, and Renee Zellweger among others.

The pair started dating in 2005 and also co-founded the Marchesa fashion label together. Some months after their wedding, the pair welcomed their two children, Pearl Weinstein, and Dashiell Weinstein. On 10th October 2017, his wife, Chapman announced that she’s leaving her husband with the fact that he has been accused of several sexual allegations. She filed for divorce last year which has now been settled with $15-20 million as divorce settlements.

In October 2017, The New Yorker and The New York Times reported that numbers of women came forward with their accusation against Harvey Weinstein of sexual misconduct in over 30 years. Soon after the news broke, he was fired from The Weinstein Company and was also expelled from the Academy of Motion Pictures and Science, professional honorary organization.

Weinstein harassed the women for three decades. Over 80 women accused him of sexual harassment. The evidence and statements were collected through records, interviews, emails, and other internal documents.

Ashley Judd, an actress is one of those Weinstein's victims. She revealed that she had a meeting with the producer after he invited her for breakfast in his hotel room in Peninsula Beverly Hill Hotel back in 1997. The meeting turned into an awkward situation after he asked her for the back massage.

Another victim on his list includes fresher employee, Emily Nestor. He invited her to the same hotel room in 1998. According to her, he gave her an offer to accept his sexual advances and promised to boost her career. The following year, his former assistant wrote a memo accusing him of the sexual assault after he asked her a body massage when he was lying naked in the office.

Back to back many women revealed their story of sexual misconduct by him.  Angelina Jolie, the most popular actress of Hollywood also revealed that she was offered sexual advances by him back in 1998.

Judith Godreche is another on the list. She disclosed that Weinstein tried to massage her during a meeting in his Cannes suit in 1996. Weinstein even proposed her to star in several movies only if she had three-way sex with him.

Mira Sorvino also spoke out about his story held back in 1995. During the Toronto International Film Festival, he tried to massage her and went to her home at night.

Some of the other women who accused him of sexual misconduct include Kate Beckinsale, Rosanna Arquette, Connie Nielsen, Alice Evans, Lena Headey, Eva Green, Heather Graham, and Sean Young among others.

Lysette Anthony claimed that Weinstein raped her in her home in London in the late 1980s. After Anthony, Asia Argento, an actress come next to the list. She revealed that the producer called her into a hotel room where he pulled her skirt up and performed oral sex on her in 1997. As per her, she pleads with him to stop but he did not stop and continued. She at that time wanted to go to the public but was scared of losing her role in the movie, B. Monkey.

Some of the other women who accused him of rape include Paz de la Huerta, Lucia Evans, Annabella Sciorra, and Natassia Malthe among others.

Weinstein passed a statement in the response to the New York Times,

‘’I appreciate the way I’ve behaved with colleagues in the past has caused a lot of pain, and I sincerely apologize for it.’’

Whereas, one of his spokesmen stated,

‘’ Any allegations of non-consensual sex are unequivocally denied by Mr. Weinstein. Mr. Weinstein has further confirmed that there were never any acts of retaliation against any women for refusing his advances ... Mr. Weinstein has begun counseling, has listened to the community and is pursuing a better path. Mr. Weinstein is hoping that if he makes enough progress, he will be given a second chance.’’

Many of the prominent persons criticized for his alleged actions. Many of the companies also announced to end their collaboration with The Weinstein Company like- Hachette, Apple, Luxus & Ovation, Amazon, and British Academy of Film and Television Arts among others.

It also came out that Weinstein used to address the ladies on the sets as p**y instead of calling with their names.

The following year, the filmmaker dropped the lawsuit for an unrevealed settlement.

Weinstein has been active on several issues including poverty, juvenile diabetes, AIDS and multiple sclerosis research.

Weinstein along with his brother sold Miramax to the Walt Disney Company for $60 million-$70 million, in 1993.

Weinstein owns two oceanfront houses worth $7 million and $8.5 million. He then sold a Home in Westport, Conn for $1.65 million.

Weinstein has a house in LA’s Beverly Grove area which he bought for $1.55 million for one of his children. A home owned by Weinstein and Chapman in Amagansett which they sold for $10 million. The two also own another house in New York City’s West Village costs $15 million. He owns a Lexus costs between $92k- $96k.

In 2010, his company faced bankruptcy with $450 million debt-restructuring deal which forced them to hand over the copyright of over 200 movies to Golden Sachs and Assured Guaranty Ltd.

In 1997, he gave $100k to an actress, Rose McGowan after an incident at the hotel during the Sundance Film Festival. He also pays between $80k and $150k to several women as the harassment settlement.

In 2012, he organized a memorable $38,500-per-person fundraiser for the former president, Barack Obama.

He promised to give away $5 million to fund the scholarship for women directors at USC’s School of Cinematic Arts but after his sexual misconduct scandal, the school rejected the pledge. He donated $100k to New Jersey’s Rutgers University and $100k to the Gloria Steinem Chair Media, Feminist Studies, and Culture.

On 21st November 1987, Harvey Weinstein married his first wife, Eve Chilton. The relationship between the couple did not last long and broke up on 21st February 2004.

After the first divorce, Harvey Weinstein married Georgina Chapman on 15 December 2007 in a star-studded ceremony. After the revelation of the scandal, Chapman filed for divorce from Harvey Weinstein.

Lily Weinstein is the first child of Harvey Weinstein and Eve Chilton on 20th February 1995.

After the birth of their first child, Harvey Weinstein and his wife welcomed their second child, Eve Chilton on 2nd February 1988.

Ruth Weinstein is the last child of Harvey Weinstein and Eve Chilton. She was born on 31st October 2002.