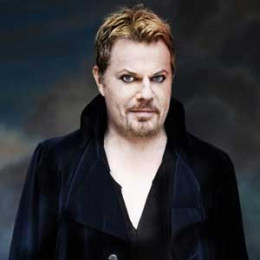 Eddie John Izzard widely recognized as Eddie" Izzard, is a British stand-up comedian actor, mostly famous as a writer and as a political activist. He is well-known as Wayne Malloy in television series The Riches. Eddie Izzard gave his voice in a Disney movie The Chronicles of Narnia: Prince Caspian which was a blockbuster of the time. Eddie Izzard was believed to be dating Sarah Louise Townsend for nearly four years. However, he was also rumored to be dating gorgeous Minnie Driver. Unfortunately, both of his affairs didn't last long.

Eddie Izzard was born on 7th February 1962, in Yemen the British colony known by the name of “Colony of Aden. He was raised in South Wales and Northern Ireland along with his brother Mark Izzard.

His father Harold John Izzard was an accountant in Aden and his mother, Dorothy Ella, was a midwife and nurse. Izzard holds British nationality and belongs to white ethnicity.

After graduating from the University of Sheffield, he toured around the US and some European countries with his friends and performed as a street artist. Moreover, he did stand-up comedy in various places of America.

The versatile comedian-actor, Eddie made his first stage appearance in London where his popularity grew throughout 1980's to 1990's.

Izzard started acting in Theatres and gradually made his way in the movie industry.  Some of his popular movies are Ocean Twelve, Ocean Thirteen, Mystery Men, Shadow Of the Vampire, The Cat's Meow, Across the Universe and so on. As a voice artist, he was actively involved in animated movies like The Wild and Cars 2.

Since 2014, he began performing stand-up shows in several languages such as German, Spanish, Russian and Arabic. Currently, he is touring his comedy show Force Majeure in three different languages.

One of the most popular actors and television personality, Eddie Izzard dated Sarah Townsend, the director of the documentary Believe: Eddie Izzard story.

The pair first met at the Edinburgh Festival in 1989 and the couple part ways after four years.

He was again linked with the Minnie Driver, but like his previous love affair, it also resulted in a breakup.

According to different sources, Comedian-actor Izzard was claimed to be gay by his fans due to his transvestite nature he often wears women's clothes and puts make-up for his stand-ups.

Immensely talented British actor and voice artist Eddie Izzard is a good looking man, famous in many parts of the world. As of 2017, his net worth is estimated to be around $18million.