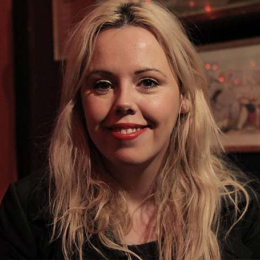 Roisin Conaty is an award-winning British stand-up comedian who made name for herself by performing at Edinburgh Festival. She is also popular as an actress for working in the Netflix series named After Life and television series Man Down. She is also recognized for being a writer of her pilot sitcom named GameFace.

Personal Life of Roisin Conaty; Is She Married?

Roisin Conaty, the 41-year-old English actress never disclosed her relationship status nor she disclosed her marriage details. The Camden, London born artist flaunted a beautiful ring on her wedding ring finger on May 1, 2020.

On the very day along with the actress's beautiful snap shot she captioned, "My hair looking like cruella deville. Getting the last dregs out of today's make up for TV so if you are a friend and want to FaceTime & sick of raw roisin come chat to baked roisin".

Though the starlet never introduced anyone as her boyfriend, she is quite close to her Game Face co-star Dustin Demri-Burns who play the love interest of Roisin aka Marcella and her partner of 12 years. She's even used Dustin's photo as her cover-photo on Twitter.

The well-known comedian is career oriented and shows no time for dating relationships and marital relationships. Moreover, she is never spotted with any men in any events and awards functions out of her reel life.

Famous British comedian-actress Roisin Conaty during her photo shoot for a magazine.

The English actress-comedian is out of any previous and present dating rumors and controversies. She seems focused on her future or is she dating someone in secret? Well, she is a private person and prefers to keep the information regarding her dating life within herself.

What is the Net Worth of Roisin Conaty?

I like to hold my cards close to my teeth. Hair by @heathmassihair makeup by @erin_kristensen @jaybrooksphoto

Roisin first appeared in the television stand-up show on the series 3, episode 4 of Russell Howard's Good News. Since then, she worked in numerous television shows like Russell Howard's Stand Up Central, Live at the Apollo, Have News for You and many more. In fact, she starred in the BBC three version of Impractical Jokers. She was one of the original cast of comedians in the series 1 of Taskmaster.

The stand-up comedian also tried her hands in the acting field and first appeared as Jo in the channel 4 sitcom Man Down. Then, she starred in Ricky Gervais' David Brent: Life on the Road in 2013. Furthermore, she was also featured in the 2019 Netflix comedy series After Life with a role name Daphne/Roxy.

The Netflix actress is also a writer as she wrote and starred in her sitcom named GameFace. She played the role of a struggling actress as with the name of Marcella. The pilot was promoted on the Channel 4 television network in April of 2014. Her pilot was premiered on the television channel E4 in October of 2014.

Roisin Conaty was born on 26 March 1979 in Camden, London under the birth sign of Aries. She holds a British nationality and is believed to be of white ethnicity. As being a private person, she has closed the doors of information regarding her personal life and early life.

Stolen from @sara.pascoe here I am practising my ted talk on seduction,I open with my seduction dance

The 40-year-old comedian caught the limelight after performing a stand-up act at the Melbourne International Comedy Festival. Further, she won the Best Newcomer Award at the Edinburgh Festival in the show named Hero, Warrior, Fireman, Liar. She lies among the only five women under 30 years to receive an Edinburgh Comedy Award.

Conaty stands at a height decent height with a pair of brown eyes and blonde hair. In addition, she is an active person on Instagram and holds over 97k+ followers. Similarly, she garnered over200k+ followers on Twitter and 16k+ followers on Facebook.