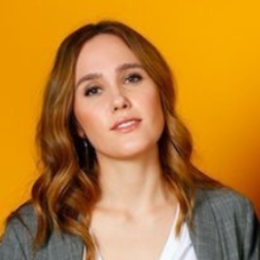 Eden Brolin is an American actress best known for Arkansas, Yellowstone and Beyond. More than that, she is the daughter of legendary actor Josh Brolin and his wife, Alice Adair. Both of Eden's parents have served the Hollywood entertainment fraternity for decades.

Josh Brolin's eldest daughter Eden Brolin is married. She tied a knot with her husband Cameron Crosby after nearly three years together. Eden's father announced his daughter's nuptials via a heartfelt post on 1 May 2022.

The Goonie star uploaded a snapshot of the couple driving a car together at the wedding, with Yellowstone cast glowing in her wedding dress. On the big day, Eden Brolin was stunned in a custom-made bridal gown, while Josh Brolin wore a cowboy hat and tuxedo. 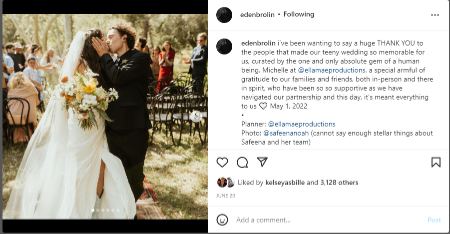 The wedding led Josh to focus on the experience of watching his elder children build lives while raising young ones. Eden and Cameron announced their engagement in August 2018, showing off a big emerald diamond engagement ring. Meanwhile, the newlywed pair raised their middle fingers to the camera and wrote a few words from the Sufi poet Rumi.

The star couple started dating in 2016. In 2018, Eden talked about her love, for now, husband in a post celebrating her first anniversary. Before Cameron Crosby proposed in 2018, he asked for Josh's permission to ask her hand in an emotional phone call.

Eden Brolin possesses a whopping net worth of $5 million as of 2022. She earned a big amount from her successful acting career. The starlet appeared in dozens of movies and tv series. She has starred in films like Ruby Sparks, I Dream Too Much, Candy Land, King Fish, and Emerald City. Her tv credits include Beyond, Code Black, and Manson's Lost Girls. 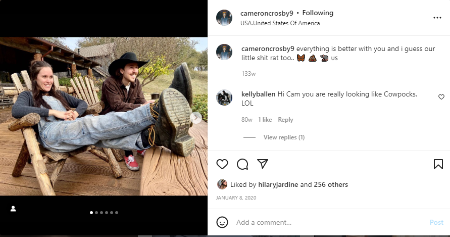 Likewise, her dad Josh Brolin has amassed a staggering net worth of $45 million per Celebrity networth. Mr. Josh Brolin is an amazing actor, director, and film producer. He has worked in theatres, television and films for almost four decades.

The father to four earned big chunks for starring in Deadpool 2, Sicario, The Goonies, No Country for Old Men, Old Boy, and Avenger Endgame. In mid-2017, Brolin signed a four-year movie contract with Twentieth Century Fox to play the Marvel character in the X-Men movie series. Likewise, 2018's Deadpool 2 was his initial installment within that deal.

Walking through Josh Brolin's real estate, the actor lived in LA's Brentwood neighborhood which he sold in 2020 for $6.55 million. A few moments later, Josh-Kathryn paid $3.55 million for real estate in Atlanta. In late 2020, the duo was brought home in Simi Valley, California, at $1.1 million.

Eden Brolin portrayed the character of Mia in the new American drama series Yellowstone. To date, she appeared in Season three, seven series episodes. The show is about a family drama at the largest ranch in Montana. The plot focuses on the bordering Broken Rock Indian Reservation and developers. 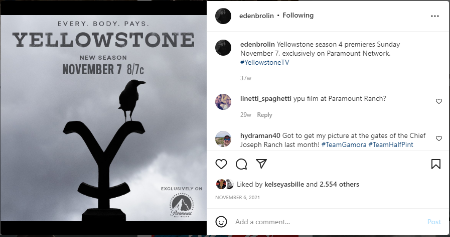 Miss Brolin shared the screen with her husband, Cameron Crosby, in Yellowstone. Cameron has starred in movies and TV series like Supernatural. The Tree Inside, Beyond, To All the Boys I've Loved Before, A million little things.

Eden Brolin has a brother Trevor Brolin who is 33 years old. He was born under the birth sign Cancer on 26 June 1988 in Los Angeles, California. Trevor went to a local high school matriculating in 2006. he graduated with a bachelor's degree in theatre arts and Cinematography.

Trevor has followed in his father's footsteps and became an actor. Also, he replicated the face of Mr. Josh Brolin too. He debuted in the 2011 "All Kids Count" family drama. Trevor composed his father's short movie "X," starring sister Eden, Vincent Riverside and Eleanor Lambert, in 2008. 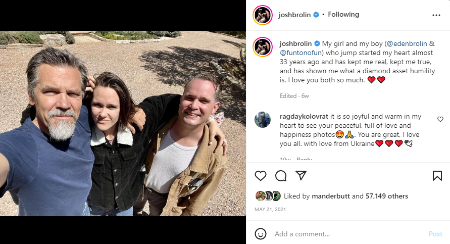 Eden Brolin's parents were married for seven years. In an intimate ceremony, Josh Brolin exchanged vows with actress Alice Adair in 1998. However, the pair called it quits in 1994, citing personal issues. Amid marriage, the lovebirds had two children, Trevor Brolin and Eden Brolin.

Check out the clip of Eden Brolin's dad, Josh Brolin, at The Jimmy Fallon Show!

Josh Borlin has married and divorced multiple times in life. Followed by separation from his first wife, Josh exchanged vows with Diane Lane on 15 August 2004. However, nine years later, the pair announced they had gone separate ways on 27 November 2013. The Black Men cast did not have children with Diane Lane.

On 24 September 2016, Josh Borlin walked down the aisle with actress and producer Kathryn Boyd Brolin. The pair have been living a good life for over seven years. Kathryn has a daughter, Westlyn Reign Brolin and Chapel Grace Brolin.

Brolin was born with a silver spoon in her mouth. She comes from celebrated family background. Her mother is an actress famous for Beverly Hills Cop II, Szuler, Desperate Avalanche At devil, Rideshare and Quantum Leap.

Eden's father made his onscreen debut playing Brandon in "The Goonies" in 1985. Josh has added 75 acting credits under his belt. He is best known for roles in "Nightwatch, No Country for Old Men, Milk, and Bed of Roses. Josh garnered Oscar for Best Supporting Role as an actor in 2008.

The actress's grandfather James Brolin was an actor as well. He served as a producer and director, while his spouse Jane Cameron Agee was an active wildlife activist. After divorcing Jane, James married singer and actress Barbara Streisand, making Eden her step-granddaughter.

Cameron Crosby and Eden Brolin are happily married for three months. They started sparking romance in 2016.