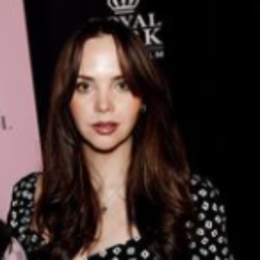 Eija Skarsgard is a former Swedish model and actress best known as the daughter of actor Stellan Skarsgard and My Skarsgard. The Swedish beauty, who did modeling at age fourteen, appeared in commercials and magazine covers.

Is Eija Skarsgard Married? Who's Her Husband?

Eija Skarsgard is happily married to her long-term boyfriend, Zeke Tastas. Tastas proposed to his lady love at Hotel Kung Carl on December 17, 2017. On August 24, 2019, Eija walked down the aisle with her lover. The private wedding ceremony was attended by family and close friends and relatives. 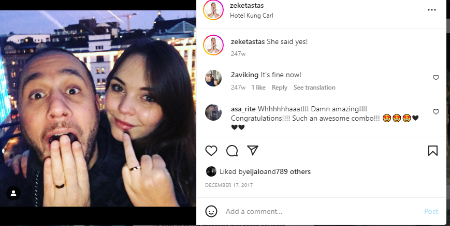 The star couple seems to be madly in love with each other. Also, both frequently post the moment they spent together on their Instagram handle. Regarding expanding her family, the former model has not yet become a mother; but she owns a dog and cats whom she treats as her own kids.

Eija Skarsgard makes a decent amount from her successful career as an event manager and model. She possesses an estimated net worth of $1 million as of 2022. In addition, the diva shares a lavish home and car with her loving husband.

Where most of her Skarsgard family members have established a name for themselves in the field of acting, Eija refuses to follow in their footsteps of them. In one of the interviews, the diva mentioned she is not interested in acting as there are already enough people in the entertainment field from her family. 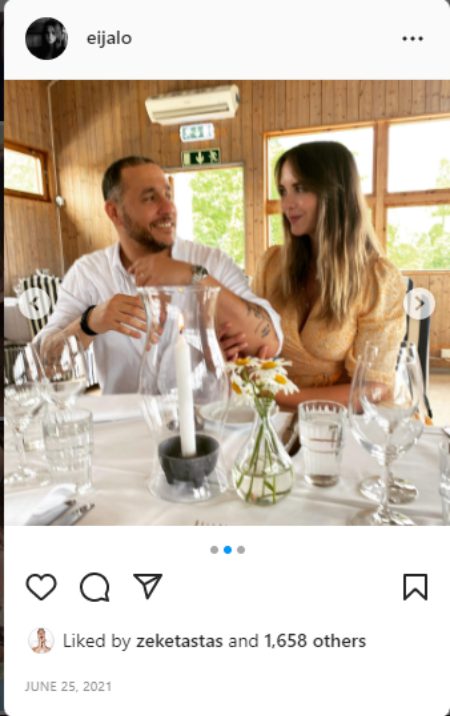 Currently, the brown-haired is content with her life as a nightclub manager at "Vardagsrummt" in Stureplan, Stockholm. One thing is for sure, if everything works in favor, Eija would love to make a comeback as a glamour model in the near future.

All in all, being the celebrity kid and daddy's girl, she possibly inherits her father, Stellan Skarsgard's fortune. Even though the starlet's parents have separate ways, and her father married another woman Megan Everett, there are no signs of animosity between the family members.

In fact, the Skarsgard siblings go well with their stepmother. Eija has a good bond with her half-siblings Kolbjorn and Ossian Skarsgard. All of the Stargrads are doing well in their journey.

Eija Skarsgard's father has married and divorced in his life. His first
marriage was to a physician My Skarsgard in 1975. However, after thirty-two years of marriage, the pair called it quits citing personal issues. Stellan filed for divorce from his wife in 2007.

Mr. Stellan says there are 36 years between his eldest and youngest of eight children, one of whom is a girl. During the actor's wife's subsequent pregnancies, his daughter would say, "I hope it's not a girl." The Hollywood star treated all of his children equally.

In 2009, Mr. Skarsgard tied a knot with Megan Everett in a lavish ceremony. Stellan has had two more children from his second wife. Megan. And after eight children, the actor underwent a vasectomy mentioning that the eight kids were enough.

Stellan is a renowned Swedish tv and movie actor widely famous for starring in Breaking the Waves, Dancer in the Dark, Melancholia, and Nymphomaniac. He started his career at the age of 21, and his appearance on stage, on tv, and in the film is palpable.

Check out the clip of Eija Skarsgard's father, Stellan Skarsgard, giving an interview at the Golden Globes 2020.

Mr. Stellan featured in blockbuster shows such as Pirates of the Caribbean: Dead Man's Chest, Mamma Mia! Skarsgard has appeared in The Avengers, Thor: The Dark World, and Avengers: Age of Ultron. In 2019, Stellan portrayed Boris Shcherbina in HBO series Chernobyl.

For the same show, the Swedish actor received Primetime Emmy Award for Outstanding Actor in the Limited or Anthology performance. His latest show includes the Star Wars prequel series Andor which airs on Disney.

Eija Skarsgard was born on February 27, 1992, as one of the fifth children of her parents. Eija Skarsgard's mother, My Guenther Skarsgard, is a professional doctor and actress as well. 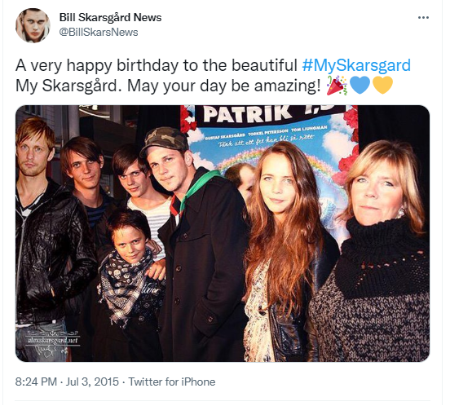 The most famous Skarsgard brother is Alexander, who made his mark on Hollywood by playing the bloodsucking Eric Northman on HBO hit series True Blood. Moreover, he is also counted as the tallest actor in Hollywood, standing at 6 feet 4 inches.

Eija Skarsgard is available on social networking sites, including Instagram. She has 18.5k followers under the username "eijalo," which the actress joined on November 10, 2010. She makes $121.5 - $202.5 per ad post.

Skarsgard has an appealing physical appearance with a height of 1.79 m (5 feet 8 inches). She has a slim hourglass-shaped body measuring 32-22-33 inches. The naturally beautiful actress is a non-vegetarian; she prefers exploring varieties of cuisines with her loved ones.

The celebrity kid goes to the gym and takes a balanced diet to stay fit. Eija's charming looks and clear glass-like skin earns her public attention. Fans would love to keep in touch with Eija on Instagram. She is pretty much popular on social media.

Eija Skarsgard is happily married to her longterm partner Zeke Tastas since the past six years, The couple exchanged vows in 2017.