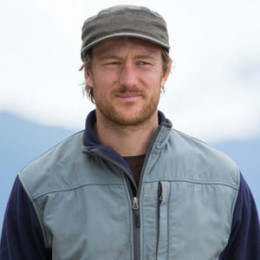 Eivin Kilcher is a reality TV star famous for his role in The Last Frontier in Discovery Channel. He is the young star who has made his appearance in the popular shows like Predators and Prey, Homestead for the Holidays and many others.

Eivin Kilcher was born on March 6, 1984. He is the oldest son of Otto Kilcher and Charlotte Kilcher. Charlotte is his stepmother.

Eivin grew up along with his three siblings. He belongs to Yule family. He grew up on a homestead where butchering cattle and other animals is the norm.

Kilcher is farmer/gatherer and Hunter by profession. He started with a single cabin and continuously grew his pastures, land, and home expanding the resources around him. He is equally involved in fishing as well. Eivin is a jack-of-all-trades like his father.

As of now, Evin made his appearance in the show entitled The Last Frontier aired on Discovery Channel along with his family including Jeremy Whalen, Otto Kilcher,  Atz Lee Kilcher, and others.

The show is all about the wild lifestyle in a remote area. He also starred in 2013’s TV series such as Predators and Prey, Of Moose and Men, Homestead for the Holidays, Hunt in the clouds, Father-Son Ingenuity and many others.

He had a keen interest in cooking, and hence he along with his wife published the book Homestead Kitchen on 15 October 2016. In 2015 he was featured in a commercial of Subaru.

Eivin is a married man. He is married to his co-star of the show The Last Frontier, Eve Kilcher. The husband and wife are parents of two children, Findlay and Sparrow Rose.

Kilcher earns a lucrative amount from his career as a farmer, hunter and reality TV star. His annual salary is $350,000 and has an estimated net worth of $2 million.

Eivin Kilcher is happily married to his co-star of The Last Frontier Eve Kelcher. The duo is blessed with a son and a daughter, Findley and Sparrow Rose.

Findley Kilcher is the first child of Eivin Kilcher and Eve Kilcher. He was born in the year 2014.

Sparrow Rose is the second child of Eivin Kilcher and his wife Eve Kilcher. She was born on September 28, 2015.