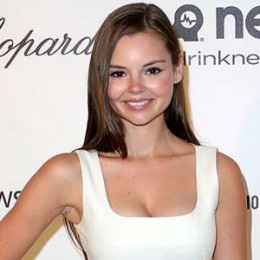 Eline Powell is a Belgian actress known for her roles in the films Quartet, Anita B. Knights of the Roundtable: King Arthur and For Elsie. She portrayed the mummer Bianca in the sixth season of Game of Thrones.

Eline Powell was born on 12 April 1990 in Leuven, Belgium to Rudi Pauwels. She has a brother.

She completed graduation from the Royal Academy of Dramatic Arts in 2011 with BA degree in acting; also in ballet, Flamenco, Hip Hop, violin and singing.

Eline Powell famous movie For Elsie (2011) was a story about a character Glenn who is about to teach the hardest piano lesson of his life. This movie was directed by David Winstone and written by Vincent Klueger.

Powell's latest movie named Anita B. (2014) is a story about a character 'Anita', a young survivor of Auschwitz looks at the world with worried eyes after WWII.

As of 2018, she is performing in the American TV drama series Siren.

Powell has a huge net worth and salary. All earned from her acting career, Powell has not revealed details about her assets.

Powell is much into herself when it comes to her personal life still, she managed to share some wonderful news with her fans.

"OKAY YES" to my love and fiancé @missing_pixel It was so wonderful sharing this with the @siren family on set the next day. Thank you so much dear friends both cast and crew for all the sweetest well wishes! You are love

She is engaged to her boyfriend Lee Lennox. She uploaded an Instagram video back in December 2018 where she showed off her sparkling diamond ring while under water.

Have a look at her handsome fiancee being perfectly ready to meet his in-laws.

Ready to meet the in-laws. Xmas power styling by my love @elinepowell

It seems the two are getting married soon.