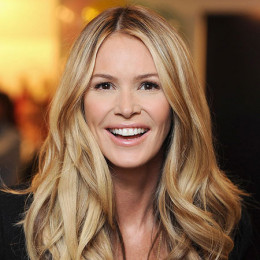 She is an Australian model, actress and television host. Her birth name was Eleanor Nancy Gow. She is best known as the primary model, founder and creative director for several business ventures, such as The Body, a line of skin care products, Elle Macpherson Intimates and a lingerie line. She was the host and executive producer of 2010 Britain & Ireland's Next Top Model. She was born to Peter Gow, an entrepreneur and sound engineer and Frances Gow, a nurse.

Elle Macpherson was born Eleanor Nancy Gow on March 29, 1964, in Cronulla, Sydney, New South Wales, Australia. She is Australian and belongs to the White ethnicity. She is the daughter of Peter Gow, an entrepreneur, and Frances Gow, a nurse.

Macpherson was just 10 when her parents split apart and she moved with her mother and two siblings. Later her mother remarried and she adopted her stepfather surname, Macpherson. She was raised in a suburb in the Sydney's North Shore.

Macpherson attended Killara High School and completed her schooling in 1981. Then she briefly studied law for a year at the University of Sydney.

Elle Macpherson started her career as a model in 1982 with a TV commercial for Tab which established her as a "girl next door" figure in Australia. By the 1980s, she rose to fame and she apperared in the cover of magazines such as Elle, Harper's Bazaar, Marie Claire, British and Australian Vogue, Cosmopolitan, Tatler, GQ, Time, L'Officiel, Flare and New York.

In 1994, Macpherson appeared nude in  John Duigan directorial venture, Sirens and feraured in the issue of Playboy magazine. She co-hotsed the Miss Universe 2001 pagent. Her popularity leds Macpherson to became an unofficial ambassador of Australian tourist comission. In 2006, she eceived the Style Icon award at the 2006 Elle Style Awards.

Elle Macpherson signed a three-year deal with Revlon Cosmetics and named her a Global Brand Ambassador.

Elle Macpherson first married Gilles Bensimon, the creative director of Elle in 1984. She first met Bensimon at the age of 21 and eventually fell in love. However, the couple failed to handle their married life in 1986.

He is the first husband of Elle, whom she first met in 1984 on a photo session for Elle magazine.

He is the second and current husband of Elle. The two were married in July 2013 at the Laucala Resort in Fiji.

He is the first child of Elle, whom she gave birth at the age of 33.

He is the youngest member in the house, whom Elle gave birth at the age of 40.