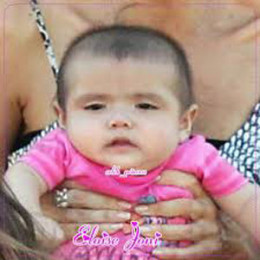 Eloise Joni Richards is the daughter of actress Denise Richards. She is the adoptive child. Eloise Joni's middle name is that of Richards' mother, who died from cancer in December 2007. Richards adopted her at birth domestically within the United States, following a two-year adoption process. Eloise Joni's mother Denise Richards has appeared in numerous films, including Starship Troopers, Wild Things, Drop Dead Gorgeous, The World Is Not Enough, as a Bond girl, and in Valentine.

Eloise Joni Richards was born in 2011. She is the adopted daughter of Denise Richards. She raised Eloise as a single parent alongside her two daughters from her previous marriage with Charlie Sheen. There is no information on which school she is enrolled in. As for her career, it's a long way away before it even begins.

Meanwhile, Denise named Eloise Joni after her mother Joni passed away from cancer in 2007. Her representative speaking about the adoption said:

The baby girl was adopted domestically from within the United States. They are living with the family in their home in Hidden Hills, California just outside of Los Angeles. Speaking to US Weekly post-adoption, she said her daughter brought so much joy to her life while expressing how much she is in love with her.

"She is a cuddle bug. She loves being hugged and held. She's such a beautiful little baby and little soul."

Moreover, Richards admitted the adoption process was far from easy. She said:

"Some people think if a celebrity wants a baby, they get one the next day. The adoption took two years, and there were times I felt discouraged, times when I got close to adopting a baby and it fell through. But I knew the right baby would find us."

Despite being a single mother, Denise has left no shortage of effort to ensure her three daughters grow up the best they can.

Eloise's mother Dennis Richards has an estimated net worth of $12 million. Her source of income includes her salary and earnings from her career as an actress, TV star and modeling.