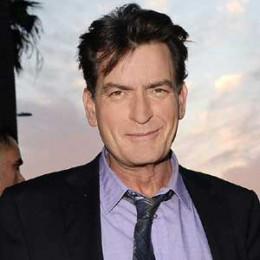 Charlie Sheen widely recognized American actor rose to fame after a series of successful films such as Platoon, Wall Street, Young Guns, Eight Men Out, Major League, Hot Shots and The Three Musketeers. Sheen is best known for his television role on the series Two and a Half Men which earned him several Golden Globe and Emmy Award nominations.

Carlos Irwin Estévez now famous as Charlie Sheen was born on September 3, 1965, in New York City, New York, United States. He was raised along with his two older brothers, Emilio and Ramon, and a younger sister, Renée by his father Martin Sheen and his mother, Janet Sheen. Later he moved to California with his parents and attended Santa Monica High School.

Since his school days, he was interested in acting and made his acting debut at the age of 9, in renowned TV film The Execution of Private Slovik. After a handful of TV movies, in 1986 Charlie Sheen landed the breakthrough role of his career in Oliver Stone’s autobiographical war drama Platoon and won four Oscars. In 1992, Sheen featured in Beyond the Law with Linda Fiorentino and Michael Madsen soon after which he became widely famous. He also appeared in several comedy roles, including the Major League films, Money Talks, and the spoof Hot Shots!

He debuted on small screen sitcom Spin City, and for his work, he was nominated for two ALMA Awards and won his first Golden Globe for Best Performance by an Actor. In 2003, Sheen portrayed as a Charlie Harper in the CBS sitcom Two and a Half Man. He was received ALMA Award and gained three Emmy Awards nominations and two Golden Globe award.

Brilliant actor, Charlie Sheen is a married man.Not only once he has been married thrice. He first married a beautiful model, Donna Peele, with whom he dated for six weeks and finally tied the knot on  September 3, 1995. Unfortunately, their marital relation couldn't last long and ended at the end of 1995.

Later in 2000, he met actress Denise Richards on the set of Good Advice. The couple began dating when Richards guest-starred on Sheen's TV show Spin City. Soon after a year, the duo married on June 15, 2002, at the estate of Spin City creator Gary David Goldberg. The pair is parents to two daughters, Sam J. Sheen and  Lola Rose Sheen. But this relation also concluded with a divorce in November 2006.

Previously before his marriage Sheen was in love with his high school girlfriend Paula Profit and gave birth to his first daughter, Cassandra Jade Estevez. He also dated gorgeous actress Kelly Preston.

Charlie Sheen is a high paid and well-established actor. As of 2017, his net worth is estimated to be around $35 million.

Charlie Sheen married beautiful Donna Peele on September 3, 1995, but their marital relationship concluded with a divorce in 1996.

Denise Richards is the second wife of actor Charlie Sheen. The couple married after their long affair on June 15, 2002.

Charlie's third wife is Brooke Mueller. The pair married on May 30, 2008, after dating for a long time.

Charlie Sheen had an affair with his high school girlfriend, Paula Profit and together they had a daughter Cassandra Jade Estevez born on December 12, 1984

Sam J. Sheen is the daughter of Charlie Sheen and Denise Richards. She was born on March 9, 2004.