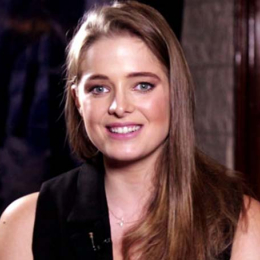 Polish actress, Erika Kaar is a famous new actress who became popular in Hollywood by just working in one television series named American Gods. She is also popular for working in the Bollywood movie Shivaay.

Personal Life of Erika Kaar; Is she dating someone?

Erika Kaar is currently dating her longtime boyfriend, Maciej Bielski. The duo shares a healthy relationship and is open about dating life. Moreover, the pair does not hesitate to share their pictures in their respective social media platform.

The actress is out of any rumors and controversies regarding her previous relationships and dating life. She is well-focused on her career and is in a deep relationship with her partner. Furthermore, there will be no wonder if the duo shares the wedding vows soon.

What is the Net Worth of Erika Kaar?

Despite having dinner next to a rather peculiar portrait, I think we found the best Italian restaurant in Warsaw! 10/10 (btw ‚Culi In Aria’ means ‚Ass in the air’ )

Erika made her acting debut by working in the 2014 BBC miniseries named The Passing Bells with a role of Polish nurse. After that, the doors of the opportunities were opened for her and she ended up playing much Polish television series like Blondynka, 'Az po sufit!', Bodo and many more. Further, she came to limelight in Hollywood after appearing in the American fantasy drama television series named American Gods.

The American Gods actress also tried her hands in the film industry. She starred in a Bollywood movie along with Ajay Devgan in a movie named Shivaay with a role of Olga. Then she also worked in the remake of the television series turned film, Bodo.