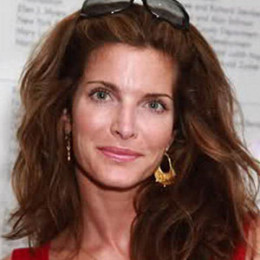 Erin Everly is a famous American model. She is best known for being the ex-wife of famous Guns N' Roses Band lead vocalist, Axl Rose. Moreover, she made name for herself by featuring in Guns N' Roses song Sweet Child O' Mine.

Erin  Everly is possibly single at the moment. She married twice in her life, however, both weddings were unfortunate for her and she divorced both of them. The model is free of rumors as of now.

Erin Everly first tied the knot to her long term boyfriend turned husband Axl Rose who is the lead vocalist of the hard rock band Guns N' Roses. They both first met at a local party in 1986 after which they became friends and started meeting.

Moreover, the duo dated for a couple of years and finally on April 28, 1990, they shared the wedding vows in Los Angeles.

After 10 months of marriage, unfortunately, the husband and wife duo separated. Evin blamed her husband for abusing her physically and emotionally throughout their relationship period.

The duo's marriage was just for a certain time, therefore, they do not share any child.

Everly married Jack C. Portman III for the second time in 1997. Jack works as the vice chairman of Portman Holdings and John Portman and Associates. The couple shares three children together as one son and two daughters Eason Portman (1996), Eres Portman (2000), and Esper Portman (2009). The relation was smooth for 8 years but in 2006 they both decided to walk their own ways and separated with an official divorce.

Erin Everly has an estimated net worth of $1.6 million as of now. Throughout, her career she managed to keep her lifestyle luxurious and maintain a high profile.

Erin started working as a model and actress at the age of 16 in 1982. She was featured in many ads and commercials and started working as promotions for brands like Bebe, Guess, Jordache and many more from which she collected a decent amount of earnings.

Erin Everly was born on November 8, 1965, in Los Angeles with Scorpio zodiac sign. She was named Erin Invicta Everly at the time of her birth. Furthermore, she is the daughter of father Don Everly and mother Venetia Stevenson.

Her maternal grandparents are Anna Lee and Robert Stevenson. She was raised along with her siblings Edan Everly, Stacy Everly.

Erin graduated from Buckley School in Sherman Oaks of the San Fernando Valley, Los Angeles but due to her family reasons she then continued her college education at a public school.

Everly married with Jack C. Portman III as her second marriage in 1997. The relation was smooth for 8 years but in 2006 they both decided to walk their own ways and separated.

Erin Everly has only one son, Eason Portman from her second husband Jack C. Portman III.

Erin Everly has two daughters from her second husband Jack C. Portman III, The name of her first daughter is Eres Portman.

Erin Everly has two daughters from her second husband Jack C. Portman III, The name of her second daughter is Eres Portman.