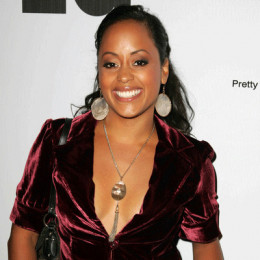 Born in Brooklyn, NY, Essence Uhura Atkins is a well known model and an actress. She is famous for her character in the famous UPN sitcom Half & Half, as Dee Dee Thorne and on the WB sitcom Smart guy, where she played the character of Yvette Henderson. She debuted in the year 1986 in The Cosby Show as Paula Young (episode "Vanessa's Rich").

Essence Atkins was born on 7 February 1972 in Brooklyn, New York to Jeffery Atkins and Sandy Nelson.

Atkins started her professional career appearing on African-American prime-time soap opera Under One Roof in 1995.

She starred in a lead role in the Oprah Winfrey Network drama series Ambitions in 2018.

Atkins has an estimated net worth of about $5 million as of January 2019.

They met via online dating service match.com. Valerie Pettiford - costar from Half & Half performed at her reception. The couple first announced their pregnancy on August 9th, 2011.

The internet is an incredible thing especially with the advent of social media. A little over a year ago I stumbled across and immediately started following @garyvee. Beyond his business acumen meteoric accomplishments and staying power he speaks my brand of hustle - "success" is vapid without kindness. Occasionally, I would affirm or applaud how one of his posts resonated with me in the comments. Gary noticed me and sent me some encouragement as he is known to do for so many and eventually I was contacted by someone on his team as an influencer to partner in ways that made sense. @empathywines is one of his latest ventures but it also encapsulates what I've observed as his mission. I wanted to share so you guys know that moving through the world with love, authenticity, hustle and the passionate pursuit of your "BRAND" of happiness can put you in places and with people that you greatly admire who, in turn, also notice and cheer as you rise. Thank you Gary, as I said today, I am grateful for your time and advise. #MondayMotivation #GoBeGreat #VaynerMedia

Essence filed for divorce with her husband in 2016. While talking to Garcelle Beauvais, Ross Mathews and Tanner Thompson, she said,

"I am going to be entering the dating world after nearly a decade."

"I’m in the process of getting a divorce, sadly. It’s weird because literally, three weeks after filing, I got this job where I’m playing a newly divorced woman who’s co-parenting with her ex that she still loves, but they’ve somehow realized that they’re not meant to partner together anymore. It was kind of this weird, amazing moment the universe was like, here’s art imitating life and we’re going to talk about this and you’re going to explore it in a really humorous way."

She is most probably single at the moment, still, she stated that she's very much ready for a new love life.

Essence Atkins is currently married to former college football player Jaime Mendez. He went to Kansas State University. He played in the position of free safety in his college football profession, and holds the Wildcats' all-time career leader in interceptions with 15.