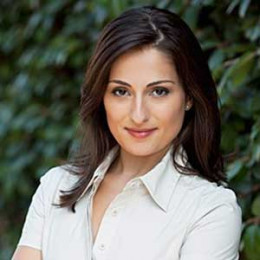 Farnoosh Torabi is well known as the Iranian-American journalist and television personality. Moreover, she is a personal finance expert and author of "When She Makes More: 10 Rules for Breadwinning Women." Her work and advice have been published in Real Simple, Glamour, Marie Claire, Cosmopolitan, Money Magazine, People, Entrepreneur, The New York Daily News, and The New York Post.

Farnoosh Torabi was born in February 1980 in Worcester, Massachusetts. She was born to Iranian parents.

She attended Pennsylvania State University and graduated with honors in finance and international business. She also holds an M.S. in journalism from Columbia University. In 2010, she was named an alumnus of distinction by Penn State University for graduates under the age of 35.

Farnoosh started her career in 2003 as a researcher and reporter at Money magazine. She later became a financial correspondent for Jim Cramer's TheStreet.com TV from 2006 to 2009.

In 2008, she was the financial correspondent on 'Real Simple, Real Life.' In 2009, she became the host of SOAPnet's The Bank of Mom and Dad, an adaptation of the BBC reality series.Her advice on that show was the New York Times called  "perfectly practical" by The New York Times. Torabi also is an author of the book titled, Psych Yourself Rich which was published in 2010 by FT Press.

In 2014, she published another book, 'When She Makes More: 10 Rules for Breadwinning Women.'The book addresses how income imbalances affect relationships and family dynamics.

She has performed on major news and talk shows, including NBC's TODAY Show, CNN, MSNBC, Good Morning America, The View and Live! With Kelly and Michael.

Farnoosh must earn a good sum as she has worked on reputed channels. Besides that, she has also published a few books. This talented personality must surely have a net worth not less than seven figures.

The couple has a son named Evan Kiani born on 21st June 2014. On 3rd March 2017, the couple welcomed a baby girl and named her Colette Soraya Dussinger.

On 3rd March 2017, the couple welcomed a baby girl and named her Colette Soraya Dussinger.