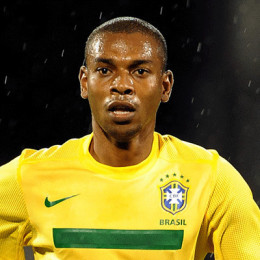 Fernando Luiz Roza, well known as Fernandinho, a Brazilian football player plays for English club Manchester City and the Brazil national team. After starting his career at a Brazilian club, he joined Shakhtar Donetsk in 2005 and played for Ukraine Premier League. His blistering pace and ability to shoot from long distances are his remarkable moves in the game that made him one of the best Brazilian player to ever join the foreign team. When he was a child he was a fan of Brazilian keeper Taffarel and wanted to be like him but his father did not let him do that. He left his home when he was 17 and moved to Atletico Paranaense.

He is the kind of person who believes in the present moment and lives it to the fullest. He speaks Portuguese, Russian, Italian and Spanish and in the process of learning English.

He is married to Glaucia Roza. They have been married for almost a decade and have a very beautiful boy named Davi Rosa. The couple welcomed a daughter named Mariana on 28 January 2017.

Inside of his left wrist, he has tattooed his wife's name.

He has a huge net worth and an attractive salary.

Fernando Luiz Roza was born on 4 May 1985 in Londrina, Brazil.

He started his career playing at Brazilian club Atletico Paranaense. He is also known for his game in the 2003 FIFA World Youth Championship, the 2014 FIFA World Cup, the 2015 Copa America, and the 2018 FIFA World Cup.

Fernandinho and Glaucia Roza have been married for nine years and have a small family with their son David.

David is the first son of Fernando and Glaucia. He has started his school in UK.