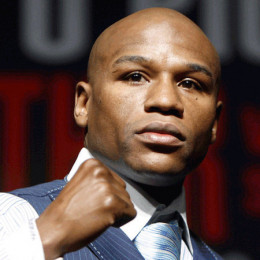 Known as Pretty Boy, Money and TBE (The Best Ever), Floyd Mayweather stands as one of the greatest fighters of all time and the best boxer of his generation. Undefeated as professional, he has won four different weight classes and 12 world titles. He had golden career being honored with numbers of awards and titles: Boxing Writers Association of America (BWAA) Fighter of the Year award in 2007, 2013 and the Best Fighter ESPY Award in 2007, 2008, 2010, 2012, 2013, and 2014. He was also honored with the title of "The Best Ever" in 2015 by Spike TV.

Floyd Mayweather Jr. was born on 24 February 1977 in Grand Rapids, Michigan into the family of boxers.

His father Floyd Mayweather Sr. was a former welterweight contender.

Floyd Mayweather Jr.'s Career Floyd is more talked about his boxing. His loss to Bulgarian Serafim Todorov in the semi-final bout was a news center then.

US team had filed protest claiming judges being incompetent and Mayweather not being awarded the points he deserved.

However, the protest was turned down and Judge Bill Waeckerle, one of four U.S judges working then resigned condemning the judges being under the influence of Bulgarian team.

Mayweather has an estimated net worth of about $560 million.

Floyd is in a relationship and had been into numbers of affairs previously too.

Zion is the eldest son to Mayweather. He was born to him and Josie Harris. He has grown up being a responsible man.

Koraun Mayweather is second son to Floyd and Josie Harris. He was born on 2nd of September 1999. He is also a sports fanatic.

Iyanna Mayweather is daughter to Melissa Brim and Floyd Mayweather. She is younger than Zion and Koraun and is loved by all.

Jirah Mayweather was born to Floyd Mayweather and Josie Harris. She is the youngest of all children to Floyd and is sweet heart to everyone.