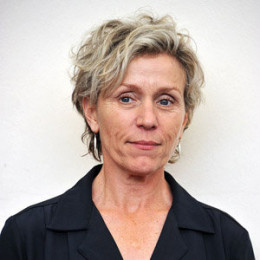 Frances Louise McDormand, 60 is an American actress. She is mostly known as the wife of director and writer Joel Coen. Her film debut was in the 1984 Coen brother's first film, Blood Simple. She was adopted by a couple originally from Canada, Noreen E. Nickleson, a registered nurse, and Vernon W. McDormand, a Disciples of Christ pastor. She became only the 12th actress in history to achieve the Triple Crown of Acting, for competitive Oscar, Emmy and Tony Award wins in the acting categories.

Frances McDormand was born Frances Louise McDormand on June 23, 1957, in Gibson City, Illinois, U.S. She is adopted by a couple,  Noreen E. (Nickleson), a registered nurse and receptionist, and Vernon W. McDormand, a Disciples of Christ pastor at the age of one and half years.

Her biological mother may be one of the parishioners at Vernon's Church. She was raised along with her sister,  Dorothy A. McDormand, an ordained Disciples of Christ minister and chaplain.

McDormand completed her graduation in 1975 form Monessen High School. Later, she attends the Bethany College in West Virginia and earned her bachelor degree in theater.

In 1982, McDormand went to Yale School of Drama where she received her Master of Fine Arts.

McDormand began her professional acting career in Derek Walcott's play, Trinidad and Tobago. She made her movie debut in 1984 in Blood Simple.

She was nominated for Tony Award for her performance in a stage production of  Tennessee Williams, A Streetcar Named Desire.

McDormand has appeared in several movies including, Wonder Boys, North Country, Friends with Money, Burn After Reading, Transformers: Dark of the Moon, Promised land, Missouri and many more.

Mississippi Burning was the movie which helped McDormand to gain her first Oscar nomination for Best supporting actress. In 1997, she won Academy Award for Frago.

In 2006, she won an Independent Spirit Award for Friends with Money (2006). She honored with  Primetime Emmy Award and Screen Actors Guild Award for Best Actress for her role in HBO mini-series.

With her Emmy award, McDormand became the 12th actress in history to receive the Triple Crown of Acting for competitive Oscar, Emmy, and Tony. She then won Academy Award for Best Actress this year for the movie, Three Billboard Outside Ebbing Missouri. She also won the BAFTA Awards for the movie.

Frances McDormand is happily married to actor and film producer, Joel Coen. The duo exchanged the vow on April 1, 1984, at an intimate ceremony in the presence of their closed ones and family members.

They adopted a son from Paraguay, named Pedro McDormand Coen in 1994. McDormand has acted in several Coen brothers' films, including a minor appearance in Miller's Crossing, a supporting role in Raising Arizona and lead roles in Blood Simple.

McDormand is the sister-in-law of Etan Coen and Tricia Cooke. She shared a good bond with Tom Hanks.

She shared an apartment with Holly Hunter during her initial days of career and before moving to Joel Coen, Ethan Coen, and Sam Raimi.

The couple is living happily with their son in New York City, New York.

Frances McDormand is one of the successful and versatile Hollywood celebrities who is better-known for her acting skills.

She has earned a good sum of net worth from her career, her estimated net worth is $16 million.

She has been married to director and writer Joel Coen since 1984. With much love and care, the couple has been able to prove themselves as a most suitable couple ever.