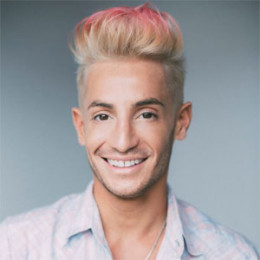 Frankie Grande, 34, is an American media personality who is known as an all-rounder as he is involved in acting, hosting, singing, dancing, producing and is also a YouTuber. Many people also recognized him as a half-brother of youth sensation, Ariana Grande. He is active in entertainment field since last 13 years. He has openly admitted being gay.

He was raised in  Englewood, New Jersey and later moved to  Boca Raton, Florida with his mom at the age of 10. He has two half-siblings; Ariana Grande and James Grande.

Grande went to Pine Crest School. He started performing since his fifth class. He then joined Muhlenberg College in Pennsylvania in 2005 and graduated with a degree in biology, theatre and dance.

Frankie Grande began his professional career in 2007 with the national tour of animated TV series, Dora the Explorer as Boots the Monkey. Later he appeared in several theater productions like; George M!, A Chorus Line, Pippin and much more.

In 2007, he joined the Broadway and performed in musical drama Mamma Mia!. After gaining fame as an actor, he then switched gears to producing many on and off Broadway shows like; Hamlet, La Bête, and Born Yesterday. The same year, he was named "Mr. Broadway 2007".

Grande portrayed the character of Consuela in the Off-Broadway musical ‘Pageant’ in 2014 and the same year he debuted on TV with US reality TV series Big Brother 16. He stood 5th and was referred as one of the dominant and outrageous personality.

Soon, he gained popularity as TV judge, host, and YouTuber. In 2014, TV Guide called him, "Our Favorite YouTube Star," he also featured in ABC Nightline. He fell under the "32 of the top social media stars on the Internet today" by Billboard in 2015.

In May 2017, he released his music single, "Queen". Recently, he appeared in the Netflix series, Haters Back Off season 2 finale as a fictionalized version of himself.

Frankie Grande is actively involved in Philanthropy too. In 2007, he co-founded the non-profit arts organization named "Broadway in South Africa" which later merged with buildOn. The main theme of his organization is to teach performance arts to disadvantaged youth.

In 2014, he was awarded Global Impact Award by buildOn for his contribution and effort to the social cause. He is also an anti-smoking advocate. He even donated his prize amount of Big Brother 16 to build a school in Africa.

Grande is openly gay, and his current relationship status is possibly single, but previously in 2016, he was romantically linked to Tayte Hanson, a model for the gay adult studio CockyBoys. There are lots of rumors regarding their secret dates and live-in together thing, but they never spoke a word about their affair.

He prefers to keep his personal life low-key but his fans loved to see him with Hanson and they even called the pair 'Fayte'.

He shares a good equation with his sister, Ariana Grande as he said she probably is the best thing ever happened in his life. In 2016 interview with Attitude, he talked about the reaction of his sister when he told about his sexuality,

Grande is also popular on social sites as he has more than 450K subscribers on YouTube and 1.7m followers on Instagram.

Frankie Grande is on his way to becoming one of the most successful media personality not only based on his fame but also on monetary terms. He came into the limelight in 2007 and in ten years span, he  collected an estimated net worth of $1.5 million, as per some online sources. Grande raised more than $70,000 for his social cause.

His half-sister Ariana Grande has an estimated net worth of $35 million.