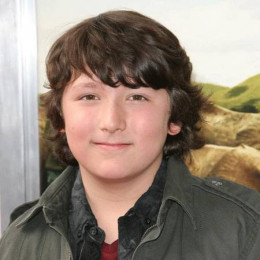 An American actor who is widely known as youngest of the Jonas Brothers. He has also frequently starred in Disney Channel sitcom, Jonas L.A.. He is son to Denise Jonas and Paul Kevin Jonas. He has three older siblings named as Kevin Jonas, Joe Jonas and Nick Jonas. Since he is the youngest among the brothers he is nicknamed as the Bonus Jonas. He started his career in 2009 by lending his voice in Japanese animated movie named Ponyo. He has also starred in movie named Camp Rock 2: The Final Jam alongside with his brother.

Talking about his personal life he is too small to get married but that doesn't stop him to date. Yes, in fact, he has date few beautiful girls already despite his small age. It seems like he is following the footstep of his brothers. Since it's obvious him to be adored by girls because at this small age he has already got a lot of success.

Frankie Jonas was born on September 28, 2000, in Ridgewood, New Jersey. He is the son of Denise and Paul Kevin Jonas Sr. and the younger brother of Kevin Jonas, Joe Jonas and Nick Jonas.

He is of Italian (from a maternal great-grandfather), German, Cherokee, English, Irish, Scottish, and French-Canadian descent. Jonas is mostly called by his nick name; Bonus Jonas, Frank the Tank.

Frankie began his career in 2009 when gets a chance to act in Hayao Miyazaki's animated film Ponyo, released in American theaters on August 14, 2009. He also sings the theme song of the movie.

Later, he worked in the Disney Channel Original Series, Jonas L.A. where he played the recurring character. Even, he won the "Choice Breakout TV Star Male" at the 2009 Teen Choice Awards.

In 2010, Jonas gets his first on-screen movie role in Camp Rock 2: The Final Jam, alongside his older brothers The Jonas Brothers and Demi Lovato.

He also appeared in Married to Jonas, a reality show, following Kevin Jonas and his wife Danielle in their married life, including the comeback of the Jonas Brothers in late 2013.

Frankie gained so much name and fame at a small age. He is just 16 years old and that might be the reason he is single and want to give more attention towards his career rather than relationship.

In 2016, he was cited for marijuana possession by police in Nashville, Tennessee.

Jonas has earned a quite impressive net worth at certain age, he succeeds to maintain a net worth of $2.3 million. Despite that, he