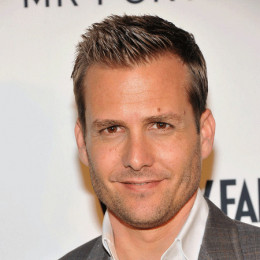 An American actor who got famous at the age of 8 after being nominated for a Best Young Motion Picture Actor Award for the film "Why Would I Lie?". He is also known for his role as Harvey Specter on USA's Suits. He is son to Suzanne Victoria Pulier and Stephen Macht. Since his father was also an actor he was greatly inspired by his father to be an actor. He is of Jewish descent. He graduated from Carnegie Mellon College of Fine Arts in 1994. He has already starred in popular movies and television series like Because I Said So, A Love Song for Bobby Long, The Recruit, and Archangel.

Gabriel Macht is blissfully married to the love of his life. The pair turned a relationship into holy matrimony after dating several years. As of now, Gabriel and his wife Jacinda are the proud parents of two children.

Talking about his relationship status he is already married to his longtime girlfriend who is an Australian-born actress. Gabriel walked down the aisle with Jacinda Barrett in 2004. Macht and his wife seem very happy together and are definitely one of the best examples of relationship goals.

Happy 14th Anniversary @jacindabarrett you are my spiritual partner forever and I have fallen for you each and every day since we crossed paths. Mother, partner, best friend, confidente,soulmate, #wife #anniversary #i #love #you

He met his future wife in a movie set. After dating a few years they got married. There has been no report of any kind of affair or relationship of him before or after his marriage. The couple has been blessed with two beautiful children.

Gabriel and Jacinda welcomed their first child, Satine Anais Geraldine Macht on August 20, 2007. Similarly, on 26th February 2014, they welcomed the second child, Luca. Putting the career aside, the duo wants to prove themselves as good parents.

How Much is Gabriel Macht's Net Worth?

Gabriel Macht has an estimated net worth of $8 million. His primary source of income is a career as an actor and film producer. Macht is best known for portraying in the American tv series, "Suits".

Driving to work and getting ready to start directing episode 807 of @suits_usa and at the stop light I met this guy who had to tell me that...#thanks #for #the #shout #out #whenudontaskforaselfie #youmightenduponmyfeed #madethisvideo #prep #directing #mechanicslikesuits #makesmesmile #pg

The Los Angeles California native starred in dozens of movies and TV series to date. He pockets $35,000 - $100 thousand per episode for appearing in television series. Whereas, for featuring in movies, Macht earns $50,000-$200,000 per movie.

Walking into Gabriel Macht's lifestyle, he owns a red Mercedez car which costs somewhere around $32,000 to $54,800.  He owned a lavish home in Los Feliz which was put on sale for $2.1 million. At present, the family of four resides in Los Angeles in 2 story house located nearby Parva Ave.

Keep coming back to Marriedwiki.com, for more celebrity biographies.

She is also an actress. She is very gorgeous. Together they look very cute with each other. She is the mother of one son and a daughter.

She is the eldest daughter of the family. She was born in Los Angeles.

He is the only son beside one daughter. The couple has given birth to healthy child.