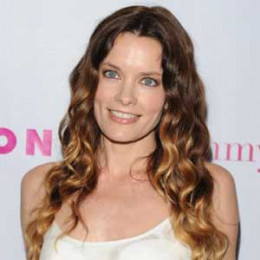 A Canadian actress, Gina Holden is best known for her roles in Blood Ties, Flash Gordon and Harper's Island. The Eyegore Award winner, Gina is also recognized for several hit horror movies like- Final Destination 3, Saw 3D, Aliens vs. Predator and so on. Gina was a non-professional dancer plus model before being a successful actress in the industry. The beautiful actress earned much of the fame from her fantastic hit movies.

Gina was born on 17th March 1975 in a small town of Smithers, British Columbia. Gina was raised along with her older brother and was interested in dancing right from the early age.

The talented, Gina used to perform plays and dance on the school's stage. The turning point of her life was when she became a model and for which she traveled to Japan.

During her stay there Holden learned the Japanese language and took several classes. Moreover, she returned to her hometown after the completion of the contract and attended school again.

Gina Holden's Career and a Net worth

Gina was signed as a model at the early age of 15 and later on shifted to Japan. In 2002 she made her debut from a television film, Roughing IT by Charles Martin Smith.

Moreover, in 2005, he appeared in Fantastic Four, an American-German superhero film directed by Tim Story and produced by Avi Arad, Bernd Eichinger and Ralph Winter with the box office collection of $330.6 million.

Besides films, Gina also worked in several TV series like- The L Word, The Dead Zone, Blood Ties, Smallville, Psych, Killer Instinct, and many more others. She also showcased her talent of acting in Aliens vs. Predator which was produced by John Davis, David Giler, and Walter Hill with $128.9 million collections.

The beautiful Gina has an estimated net worth of $500 thousand. Her movies have collected a huge amount at the box office and must have earned a good salary for it.

Holden has kept her personal life confidential. Till date, there have been no rumors about her affairs and dating life. But her Instagram tells a different story about her life.

According to Gina's Instagram photos, she might either be a married woman or is in a relationship with her secret man who is often seen in her posts. Holder is now pregnant and is in her 28 weeks. Very soon her baby boy will be born.

She worked to encourage the bullied teenager to build their physical and mental strength to initially develop confidence and self-esteem.