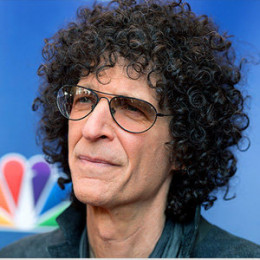 An American Radio and television personality producer, an author as well as actor and photographer, Howard Stern is currently married to Beth Ostrosky Stern since 2008. He was born to Ben and Ray Stern. Howard is best known for his radio show "The Howard Stern Show". He completed his diploma at Radio Engineering Institute of Electronics in Fredericksburg, Virginia and earned his radiotelephone operator license. He landed his first radio jobs while at Boston University.

Howard Stern was born on January 12, 1954, in Queens, New York, U.S. He is the second child of Ben and Ray (néeSchiffman) Stern.

Howard Stern landed his first radio jobs while at Boston University. He developed his on-air personality through morning positions at WRNW in Briarcliff Manor and WWDC in Washington, D.C.

In 1985, Stern started a 20-year run at WXRK in New York City which attracted  20 million listeners at its peak. He won numerous prestigious awards including Billboard Award and Blockbuster Entertainment Award.

Earlier in January 2019, he adopted a political discussion. He discussed on President Donald Trump's immigration and border security address.

He mentioned that there's no crisis at the U.S.-Mexico border and further emphasized on Trump's proposed border wall.

"The wall’s a problem because it’s a waste of money, even Donald knows that. You gotta know Donald a bit to understand what’s going on here. The wall’s a simplistic answer to our problems with immigration. It’s something that, you know, morons can get behind because they’re like, ‘Oh, yeah, if you build a wall no one can get over it.’ But it’s not that simple."

Meanwhile, he highlighted the fact that Trump demanded $5.7 billion funding for the wall that Mexico would pay for.

Currently, the radio personality is working on a new song produced by Mark Johnson, as Billboard notes. Talking about the origin of the new song, he compared his voice to the B-52s' Fred Schneider.

"I could yell out some shit and have a hit song. I don’t want to make you do anything you don’t usually do. Take that voice, the platinum thing anyway, and just make it the star of the show."

Howard Stern's estimated net worth is $650 million and an annual salary of $90 million.

Howard also dated to Angie Everhart and Robin Givens. In 2000, he started to date model and television host Beth Ostrosky and announced their engagement on his radio show on February 14, 2007.

They married at Le Cirque restaurant in New York City on October 3, 2008. While he moved on in his life, his ex-wife also moved forward in her life and married David Scott Simon.

Stern was previously married to Alison Berns in 1978 but the couple ended their marriage relationship in the year of 2001.

In 2000, he started to date model and television host Beth Ostrosky and announced their engagement on his radio show on February 14, 2007. They married at Le Cirque restaurant in New York City on October 3, 2008.

Emily Beth was born in the year 1983. She has two younger sisters.

Debra Jennifer was born in the year of 1986. She has one younger sister and one elder sister.

Ashley Jade was born in the year of 1993. She has two elder sisters.