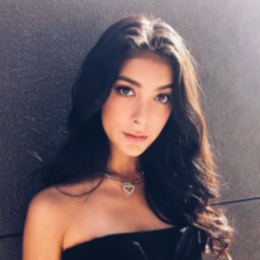 Giselle Torres is a bilingual singer, actress, and dancer who achieved tremendous success on her Youtube channel titled Angelcbroadway. Torres posts original music as well as covers on her YouTube channel.

Giselle Torres is enjoying sound life with her boyfriend of two years, Brandon Keith Rogers. The co-stars turned to lovers who started dating in early 2019. Both Giselle and Brandon's Instagram profiles are showered with pictures of one another.

And since then, they have been inseparable. Giselle appeared on Brandon Keith Roger's Instagram profile in July 2019. Most of her songs are performed with Brando Keith Rogers.

Giselle Torres has an estimated net worth of $1 million as of 2022. Torres earned a reasonable amount from her career as a YouTube star, singer, and actress. Singer Nelly and Sub Urban are popular singers like Torres.

On the Youtube channel Angelicbroadway, Torres uploads both cover and original music. She'd once covered Justin Bieber's song Sorry, and it became viral in no time.

In 2014, Torres was listed under the top 6 pop band Give Me Five on The Factor (US) before trying solo. In addition, Giselle started performing on stage at age three. She sang in Broadway Musical Theater productions of The Musical Anime, Hairspray, Shrek: The Musical, Anime, Oliver!, and Beauty and the Beast.