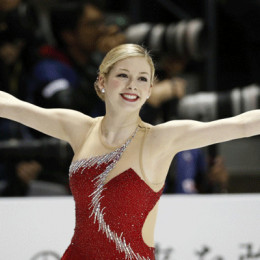 Gracie Elizabeth Gold, an American figure skater was born in Newton, Massachusetts and raised in Springfield. The daughter of Denise and Carl Gold, Gracie started skating when she was 7 years old and at 13 began training with a professional. Gold and her family is Roman Catholic. Carly, her twin sister is also a competitive skater. In 2008 she took home the Annette Cramer Trophy and Jack Might Trophy in 2009. She has competed at 2012 World Junior Championships in Minsk and won the silver medal at the event. She has also received a bronze medal in 2014 winter Olympics in Sochi, placed 4th position in the ladies singles skating competition and placed 5th at the 2014 World Figure skating Championships in Saitama, Japan.

Gold opened up about her struggle with mental issues for the very first time in January 2019. She mentioned that she was "suicidal for months" and covered every mirror in her home as she was unable to face herself.

She revealed her struggle with depression and the eating disorder that made her withdraw her step back from competitive figure skating.

Happy Mother's Day @easytobekind! Miss you like crazy. Can't wait to have even more adventures together

She recalled hiding in Detroit until her landlord came to collect her rent in 2017.

She told the New York Times,

'I was suicidal for months. 'If I had just continued the way I was in Detroit, I’d probably be dead.'

Struggling with mental health, she took a break from her professional career for treatment for anxiety, depression and an eating disorder.

Details about her net worth and salary is still under the radar.

Grace Elizabeth Gold was born on 17 August 1995 in Newton, Massachusetts.

She is the first and only American woman winning an NHK Trophy title.