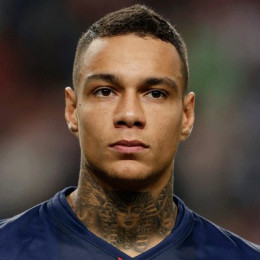 Gregory Kurtley van der Wiel is a Dutch international football player who plays as right back professionally for Ligue 1 side Paris Saint-Germain, as a right back. He was born in Amsterdam to a Dutch mother and a Curacao father. Before starting his career at RKSV DCG in Amsterdam, he had played as youth soccer for Harleem. At the age of seven, he was scouted by Ajax and brought to the Ajax Academt at “De Toekomost”. He played professionally for Ajax from 2007 to 2012.

The non-smoker player, with a nickname Blackcard Greg, is a Christian and his star sign is Aquarius.

Our first Christmas together

The player famous for AFC Ajax, PSG, Dutch national football team 'Oranje' has been dating since 2014 with a Belgian model Stephanie Bertram Rose. Both of them lives in Paris. He hasn't revealed anything about his marriage plans so far.

They announced that they were expecting their first child together in September 2017. His girlfriend gave birth to a daughter, Naleya Rose on 24 February 2018.

He received the Johan Cruyff Award for "Young Player of the Year".