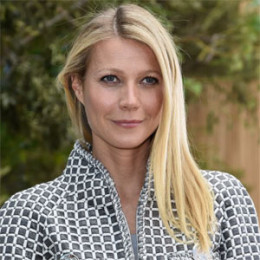 American actress, singer, and food writer, Gwyneth Paltrow is the daughter of Blythe Danner, an award-winning actress, and Bruce Paltrow noted film producer/director. Apart, she is married twice and is a mother of two children.

Gwyneth Paltrow is married twice. As of now, she is living a blissful married life with her second husband, Brad Falchuk. Her spouse Brad is a TV writer by profession.

Holy fuck am I in love with you. Happy Valentine’s Day @gwynethpaltrow

After dating for months, Paltrow got engaged on 8th January 2018. After some days at the 2018 Producers Guild Awards, she shows off her big blue engagement ring. As of 2019, almost after a year of their marriage, they are finally moving in together.

The husband-wife couple shares no children together but Brad shares two children from his previous relationship with ex-wife Suzanne Falchuk. His children are Isabella Falchuk and Brody Falchuk.

The star previously married Chris Martin in 2003 and divorced in 2014. The couple has children including Apple Martin born on 14th May 2004 and Moses Martin born on 8th April 2006. Some months after the divorce, she finally opened up the reason stating its, ''consciously uncouple.''

Gwyneth Paltrow has the net worth of around $60 million. Her acting career is her major source of income.

Paltrow moreover studied anthropology at the University of California. Paltrow is 'Save the Children' artist ambassador, also raising awareness about World Pneumonia Day. In October 2007, she signed for the PBS television series 'Spain... on the Road Again'.

Gwyneth Paltrow was previously married Chris Martin in 2003 and divorced in 2014.The couple has two children.