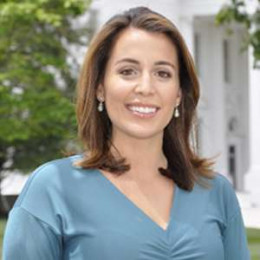 Hallie Jackson is a TV journalist, best-known for being the correspondent for NBC News. She has been active as a journalist since 2006 and has worked in several parts of United States. She married Doug Jacker in October 2011 and according to some sources, they are parents of two children.

Jackson was born on 29th April  1984, in Yardley, Pennsylvania, U.S. He is an American who belongs to the White ethnicity.

Jackson had a successful career and a sophisticated standard of living. She graduated in 2002 from Pennsbury High School. In 2006, Jackson went to Phi Beta Kappa from Johns Hopkins University with a B.A. degree in political science.

Jackson has covered a number of events, including the Ted Cruz presidential campaign. After she graduated high school, she joined Johns Hopkins University and majored in political science and earned a baccalaureate degree in 2006.

Soon after graduation, she joined WBOC-TV in the towns of Salisbury, Maryland and works for about two years. After her departure from WBOC-TV, she worked in different television firm around the United States and joined NBC News as reporter/journalist since 2014.

White House correspondent for NBC News, Hallie Marie Jackson is professionally popular as Hallie Jackson. She is an anchor for cable division, MSNBC and a fill-in anchor for Today.

Hallie Jackson at her workplace.

Jackson began her journalism career at WBOC-TV in 2006 until her departure for WFSB in 2008. She became an NBC News reporter and journalist in 2014. She became popular after she covered the Ted Cruz presidential campaign as an embedded reporter for NBC News.

In late summer 2016, Jackson worked as an anchor in the 1 P.M. ET edition of MSNBC Live, NBC News daytime coverage platform. In January 2017, NBC named her as  'White House' correspondent.

In February 2016, while Jackson covering the Republican presidential nomination race, her nose started running out. But she continued with her work without distracting from what happened.

While covering the US 2016 presidential election people criticized Jackson for biased against Trump, yet failing to dissect issues related to Hillary's presidential campaign.

Besides journalism, Jackson is also interested in science photography. In 2006, she was inducted as a new member of Phi Beta Kappa, from the senior class in the Krieger School of Arts and Sciences.

The traveling reporter, Jackson is married to her college boyfriend, Doug Jacker. The couple engaged in May 2010 and married after a year of their engagement.

Their wedding took place at Perkasie, Pennsylvania in Bucks County, among their family and close friends. However, the duo did not publicize their marriage ceremony.

According to some online sources, the duo parents two children but no official confirmation has come from their side.

However, the duo did not publicize their marriage ceremony. They are together for seven years and there aren't any news or rumors regarding their divorce.

Jackson made a huge amount of money working at NBC. As per some online sources, NBC anchors earn $70k yearly, so her salary should close to that. She has a net worth close to millions.

She has an estimated net worth of about $1 million.

The couple got engaged sometime around May 2010, when Hallie was working for WFSB. Although the engagement was not officially announced, it was the viewers that saw and pointed out a huge precious rock in her ring finger, which had ignited the engagement rumors. And finally, she married her long-time boyfriend, college sweethearts on October 2011.

She is the first child of Hallie and Doug. She is just beautiful as her mother.

She is the second child of her parents. She is a high school student however her name is still mystery to everyone.