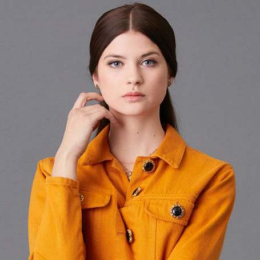 Swedish actress, Hanna Ardehn is a famous rising actress in Sweden who has already garnered much love and supports from the audience by just appearing in few films. She is popular for working in the First ever Swedish Netflix series named Quicksand. The 23-years-old actress is also recognized as an actress of famous Swedish films like 7X-Lika barn leka bast and 30 Degrees in February.

Personal Life of Hanna Ardehn; Is she Dating Someone?

The well-known Swedish actress, Hanna Ardehn is currently out of any dating relationships and seems focused on her acting career. Moreover, it looks like she is still searching for her love of life.

Famous Swedish actress Hanna Ardehn during one of her photoshoots.

Hanna is out of any rumors and controversies regarding her personal and professional life. She is career-oriented and is never spotted with any men out of the reel life. Additionally, she loves to spend time away from the media and acting projects and goes on vacations whenever it is possible.

What is the Net Worth of Hanna Ardehn?

Hanna debuted in the film industry by working in the 2007 Swedish film named Lidingoligan.

After that, she worked in many films like '7X-Lika barn leka bast', 'Krigarnas' and many more. Besides, she first started acting at the age of six after joining her first youth theater group.

Hanna Ardehn was born on 4 October 1995 in Sweden with a birth sign of Libra. She was raised in the Northen Suburbs of Stockholm, Sweden. Further, she is a private person and prefers to keep the information regarding her early life and personal life within her self.

Who you talkin' to? . . Foto: @saraech.photography

The Netflix actress studied psychology at the Linkopings Universiteit. In addition, she is an active person on social media and uses social media platforms like Instagram, where she garnered over 48.5k followers as of 2019.