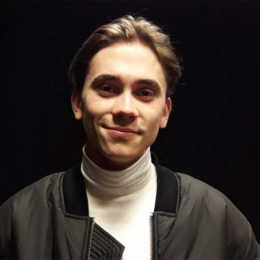 Felix Sandman is a famous Swedish singer, songwriter, and actor better known for being the member of the Swedish band FO&O. He is also popular for working in the first ever Swedish Netflix series named Quicksand. The 20-year-old singer is popular for his solo album Emotions and songs like Every Single Day, Something Right and many more.

Felix Sandman's Current Relationship Status: Who is he Dating?

Swedish singer Felix Sandman is currently dating Andrea Kallstrom. The duo is open about their relationship and is together from over a year. As seen in their social media posts, they are deeply in love and there will be no wonder if they share the wedding vows soon.

Famous Swedish Pop-singer and actor Felix Sandman and his girlfriend Andrea Kallstrom during their vacation in Bali.

The couple first met and started dating from the year 2018. Since then, they are spotted together in many places and often shares their pictures together in their respective Instagram accounts. Here, take a look at the pair chilling out together!

He spends his life with his family and his love of life. But he couldn't celebrate Valentine's Day 2019 with his love as he had a busy schedule in Berlin. Still, he didn't miss to share a video of his girl!

Unfortunately I’m not with my valentine today cuz I had work in Berlin. I miss my baby so much. Video from Bali. I love you. Happy Valentines Day people

Sandman and his girlfriend are enjoying every single day as Valentine's Day so, that's the plus point in their relationship.

How much is the Net Worth of Felix Sandman? Know About his Career

Felix Sandman holds an estimated net worth of $500,000. He gathered that wealth working as a pop Singer and an actor. In addition, the average salary of a pop singer is $45,000-$64,000 per year, however, it depends upon the number of albums a singer release, his popularity, and the number of shows he does in a year.

Sandman formed a pop band along with his friend named The Fooo in October 2013. Later, they changed the named twice with the title The Fooo Conspiracy in September of 2014, and FO&O in 2017. Furthermore, his first solo single "Every Single Day" peaked at number one on the Swedish singles chart.

Later, he released his debut album named Emotions and went on his first tour as a solo artist. More to that, until now he published many singles including Tror du att han bryr sig, Imprint, Lovisa, Miss You Like Crazy, and Something Right.

You May Also See: Alexander Skarsgard's Net Worth & Relationship Status

On the other hand, he recently starred in the first ever Swedish Netflix series named Quicksand along with the stars like Hanna Ardehn released on 5th April 2019. Besides he also worked in the 2013 Swedish drama film named 'Vi ar bast'.

Take a look at the Interview of Felix Sandman at the London Eurovision Party 0f 2018 talking about Melodifestivalen 2018: