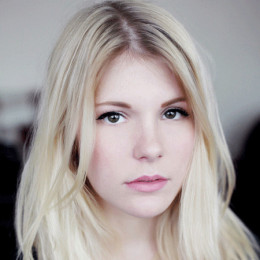 Hannah Arterton is a British actress, whose actual name is Hannah Jane Arterton. She is noted for her role in Atlantis, Hide and Seek, At Firs,t Sight and Walking on Sunshine. She studied at Royal Academy of Dramatic Art (RADA) and is a graduate of The Miskin Theatre (NWK College). Since 2009, she has been performing as a lead singer for the band "The Hitmen and Her". She was raised along with her sister Gemma Arterton, who also is an actress.

Hannah Arterton was born Hannah Jane Arterton to parents Sally Anne Heap and Barry Arterton on January 26, 1989, in Gravesend, Kent, England. Her mother Sally is a businesswoman while her father Barry is a metal worker. For her schooling, she attended Gravesend Grammar School. Later on, she attended the Royal Academy of Dramatic Art in 2011.

She grew up with her older sister Gemma Arterton in a council house formed by local authorities. Arterton was interested in acting from the age of seven since she was convinced to become an actor later on after watching the rehearsal of the musical The Wizzard of Oz. She trained herself at the Royal Academy of Dramatic Art.

Hannah Arterton is professionally an actress who is well known for portraying the role of Emma Castle in the Netflix Original Series Safe in 2018. She first entered the acting through the theatres and her play was My City which she performed at the Almeida Theatre with Tom Riley and Tracey Ullman. Arterton first debuted in the movie industry in 2014 from the movie Walking On Sunshine where she portrayed the role of Taylor.

After her debut, she started appearing in more movies like Hide and Seek, Burn Burn Burn, Heretiks and so on. Besides movies, she has been cast in some series as well. She has appeared in some Television series like Midsomer Murders, The Five, Versailles, Safe and more. Arterton is a successful singer and guitarist as well.

Hannah Arterton's net worth is not estimated as of yet. Her major source of earning is from her career as an actor. Arterton's sister Genna Arterton who is also an actress has a net worth of $8.5 million and $13 million according to The Richest and Celebrity Net Worth respectively.

Happy Valentine’s to my bee

The couple is not married yet. Besides, she stands a height of 5 feet 4 inch.