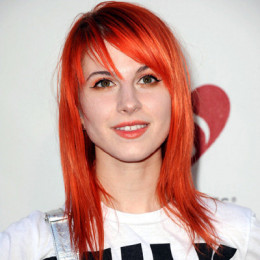 Hayley Nichole Williams is an American singer, songwriter and musician best known as the lead vocalist of the American rock band Paramore. She is the descendant of Joey and Cristi Williams. For making a unique mark in music and paving the way for other artists, she was honored with the "Trailblazer Award" in the 2014 Billboard's Women in Music Awards Function. She is a tattoo lover and have several tattoos around her body parts.

Before this relationship, she had dated a guy from her band with whom she stayed for three years but they broke up due to some odds among each other. She has never been to any controversy that has let her stardom down.

#PoserPaste Hair Makeup. for the bold commitment-phobes. 15% off now at @gooddyeyoung for #SmallBusinessSaturday through 11/26 . photos by @phojoh

The couple engaged on Christmas Day but they separated on 1st July 2017.

He is also frank about his choice not to smoke, drink or use of any kind of drugs.

Williams has an estimated net worth of about $14 million as of 2019.

Haley Nicole Williams was born on 27 December 1988 in Meridian, Mississippi to parents Joey and Cristi Williams.

Her parents divorced in 2002. She has two half-sisters.

She formed the rock band Paramore in 2004 alongside Zac Farro, Josh Farro, and Jeremy Davis.