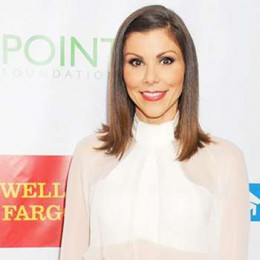 Heather Dubrow is a prominent American actress and television personality best known for her appearance in 2000 CBS drama That's Life. She worked with The Real Housewives of Orange Country from 2012 to 2016.

Who Is Heather Dubrow's Husband? Are they still together?

Heather Dubrow is married to Terry Dubrow, a plastic surgeon since 1999. The reality star and her beau turned their boyfriend-girlfriend relationship into holy matrimony after dating several years. Their intimate ceremony was attended by some close friends and family members.

The duo is blessed with four children, three daughters, and a son. Two of their kids are twins- Nicholas and Maximilla born in 2003. Remaining two, Katarina and Collette were born in 2006 and 2010.

Heather is happy with her married life and isn’t found dating with anyone else except her husband. The cupid is united as life partners for over two decades now and till today, they are not involved in extramarital affairs and divorce rumors.

The Bronx, New York City native is a good mother and caring wife to Terry. She is a serious mother and wants her children to secure a good future. She is caring for each one with everything she has got.

How Much Is Heather Dubrow's Net Worth?

Heather Dubrow, the mother to four possesses an estimated net worth of $30 million. The starting income of Dubrow was $70,000 per season. The rest of the RHOC stars earns a salary of $200,000 to $350,000 from the Bravo series Real Housewives of Orange County.

The starlet is as famous as RHOC alums Lizzie Rovsek, Tamra Judge, Shannon Beador who earned excess fame from Season 9.

Dubrow shared a deluxe Orange County house with a spouse, Terry, and their kids which cost $15,450,000 in 2013. It consists of a spacious garden, swimming pool, and gym.

Heather Dubrow was born as Heather Paige Dubrow on January 5, 1969, in The Bronx, New York City. The actress who belongs to a fifth-generation American of Jewish spent her childhood in Chappaqua in New York.

Her family has Ashkenazi roots in Austria, Hungary, and Poland. She went to Syracuse University and earned her BFA in 1990. She chased a career in the Hollywood industry since 2000 appearing in CBS drama That's Life.

He is an American Plastic Surgeon and Television Personality. He also appears in the show Real Housewives of Orange County with his wife.

He is the first child to his parents along with his twin sister. He is currently in his Junior High school.

She is the first child to her parents along with her twin brother. She is currently in her Junior High school.

She is the third child to her parents. She is currently in her Junior High school.

She is the fourth child to her parents. She is currently in her Junior School.