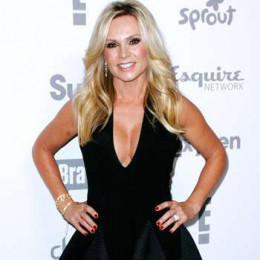 Tamra Barney best known as Tamara judge after being married to Eddie Judge is a well-known TV personality, as well as an actress at Bravo, hit series, The Real Housewives of Orange County which began in 2006.

Tamra Judge has been married more than twice in her life. You heard it right, she's hitched to three different men and is a mother to four children. At present, she has been living blissfully with the third husband despite two bitter divorces.

Tamra married Eddie Judge in June 2013 after dating for three years. An American reality star and lawyer walked down the aisle in a widely televised, multi-episode housewives-televised event in September of 2013.

When Tamra first met Eddie, he was managing the Judge Law Firm in Irvine, California. Mr. and Miss. Judge made guest-appearance in the spin-off reality series, Tamra's OC Wedding on Bravo in 2013.

In August of 2017, Tamra and Eddie renewed their vows in Aruba after four years of wedlock. The couple decided to do so after the starlet's daughter, Sidney from the second husband slammed her on social media taunting with several posts.

Tamra Judge married Simon Barney in 1998. She divorced her now ex-husband Simon Barney in the fall of 2011. Their messy split took place amid filming and their custody battle raged on for quite a long time. Simon filed for divorce during the fifth season of RHOC in early 2010 accusing her of being abusive and engaging in extramarital affairs after eleven years of their togetherness.

In between divorce procedure, Simon was opposed to their three children-Sophia, Sydney and Spencer which created big issues in the custody dispute. In 2010, the businessman was arrested for throwing a dog leash at Tamra as they battled over who'll keep the dog. Sooner or later he came engaged to Catushia Ienni.

On 18 February 2020, the Real Housewives of Orange County alum confirmed to PEOPLE he is battling with stage three throat cancer. Simon added, "I think everything happens for a reason. I think your destiny is pretty much set for you, and you are here to learn lessons".

The father to three said, he first noticed his salivary glands were swollen on one side in May. Doctors thought it was just an infection, but an ultrasound and biopsy showed that other areas were also affected, including the other side of his neck.

While he underwent follow-up appointments with new doctors, they found cancer had spread to Simon's throat, tonsils, and lymph nodes. The biopsy tells the cancer was too spread out for the surgery so he would require a dual treatment of chemotherapy and radiation.

Tamra Judge, the fitness company owner tied a knot with her high school partner, Darren Veith in 1985. The reality star and Vieth were happy in their conjugal life of five years. Sadly, their relationship turned sour.

The couple called it quits in 1990 after things didn't go right between the two. They had a son Ryan who don't suppose Darren as a good father. Simon was more of a father figure to him than Vieth was ever to him. Tamra is a grandmother to Ryan's daughter Avan Vieth.

Is Tamra Judge a transgender?

Tamra Judge, the RHOC cast was once rumored of a lesbian nevertheless people later came to know she was only "transgender" on her show "The Real Housewives of Orange Country".

How Much Is Tamra Judge's Net Worth?

Tamra Judge is a millionaire. She possesses an estimated net worth of $2 million as of February 2020. The 52-year-old reality TV star receives a decent salary of $325,000 per season. She works with Lizzie Rovsek, Heather Dubrow and Shannon Beador in the Bravo hit series.

Besides reality show, the Richy rich co-owns a fitness company aka gym known as C.U.T. fitness with her husband, Eddie Judge in Rancho, Santa Margarita, California.

She and her present husband Eddie celebrated its grand opening in February 2013. She bags a big amount of revenue from her job as a real estate agent for Ladera Realtor. The RHOC cast and her family currently reside in her luxury house which costs a cool $2 million.

Tamra Judge was born as Tamra Sue Waddle on September 2, 1967, in Glendora, Southern California. She holds an American nationality and belongs to white ethnicity. The 5 ft 3 inches tall performer's birth sign is Virgo.

Tamara has a troubled childhood as she once said that she asked her mom why her mom didn't say that "she loved her as a child". Her parents are not that popular and known as she doesn't talk much about them.

For more interesting biographies, keep coming back to Marriedwiki.com!!

Darren Vieth was Tamara Judge first husband.They had a child name Ryan Vieth from their married life and now they also have a grandchild.But they got divorced at 1990 with many controvercies going on.

After Tamara Judge was divorced with her first husband she got married with Simon Barney at 1998 after 8 year her first divorce.She had 2 daughter.

Eddie Judge is Tamara Judge 3rd husband.They tied their marriage knot 2 years after having with her second husband.

Rayan Vieth is the son of Tamara judge and her first husband Darren vieth.He also has many controvercies as about having disputes with his ex sarah on instagram as well as being drunk and getting arrested.

Sidney Barney is the daughter of Tamara judge and Simon Barney.She is the eldest daughter among their 3 children.She has been living with her dad after having disputes with Tamara.She says that Tamara aint a good mother and she uses thei name just for Fame and fulfilling her pocket.

Spencer Barney is son of Tamara Judge and Simon Barney.He is the youngest Child of them.Spencer stays with Tamara and he doesnt talk with simon at all.He is the fourth child of Tamara.