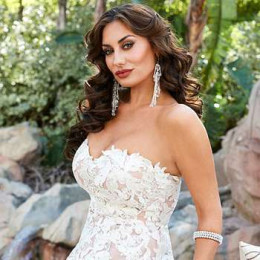 Lizzie Rovsek is one of the two new Real Housewives of Orange County castmates. She gained media attention as soon as she joined the hit Bravo hit show in the 9th season. Besides reality shows, she is a former beauty pageant titleholder and an entrepreneur.

Lizzie Rovsek is currently single. She's recently gone through divorce settlement and custody battle with a husband of ten years Christian Rovsek. The blonde beauty filed for divorce on 13 July 2017.

After dating for several years, they tie a knot in 2009 at a Santa Barbara resort called Bacara resort and Spa. The lovebirds knew each other since they were 22 years of age.

The reality star and her beau are blessed with two children, Preston and Kingston. Information on his sons is still not available. However, there was a buzz that she was intending to give birth to another child but before the arrival of a third child, they parted ways.

On 18 December 2018, Lizzie settled divorced with $10,000 spousal support a month. The duo shares joint custody of their two adorable sons. Either of the pair has signed outlining custody, child support, and spousal support, proudly closing the chapter on divorce.

The RHOC cast is an intelligent and beautiful lady with hands full of career opportunities and a good future. She was an honest wife and a loving mother. Her datings with Nick Lachey were true, but after she walked down the aisle with married she isn’t found dating with any of her boyfriends.

Who Actually is Christian Rovsek?

Christian Rovsek is an American real estate investor, entrepreneur, and investor who possesses a net worth of $25 million. His father is a successful marketing consultant and her mother is a member of Old Globe Theater, San Diego. The father to two kids earned a degree in Real Estate and Marketing from San Diego University.

How Much Is Lizzie Rovsek's Net Worth?

Lizzie Rovsek has an estimated net worth is $4 million. She stars in the Bravo hit series, The Real Housewives of Orange County with Tamra Judge, Heather Dubrow, and Shannon Beador.

According to an agreement done while divorcing procedure, Lizzie will be paid $10,950 from her ex-partner a month, including $6,949 per month in spousal support, and $4,001 in child support for 5-year-old Kingston and 8-year-old Preston. In addition, the deal entails neither of the kids would be supposed to another religion besides Christianity.

Speaking of career, Miss Rovsek is a former fashion model and a Miss Kentucky 2002 titleholder. She competed in both Miss USA and Miss Universe pageants. She is also a swimsuit designer and owns the clothing line "Sun Kitten Swimwear by Lizzie" through which she generates a huge amount of revenue. It also manufactures high-end women's bathing suits decorated with jewels.

Lizzie Rovsek was born in 1980 in Rancho Santa Fe, California to Benjamin A. She is currently 40 years of age. She is a daughter of Arnold and Margaret Angela Arnold (Jeris). Lizzie, who's former Miss Kentucky holds an American nationality and belongs to white ethnicity. Not much information about her childhood is available.

He was born in California; he is a successful Real Estate Executive. He loves to go out with his wife and children.

He is the first son to his parents. He is in his pre-primary and is brilliant in his class.

He is the second child to his parents and when at home he sit by his mother. He has got lips like his mother's.