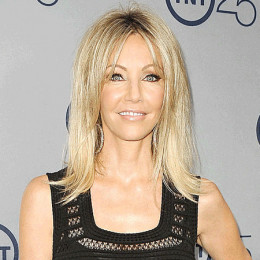 Heather Deen Locklear is an actress and model, known for appearing on several TV series, as Amanda Woodward on Melrose Place, Sammy Jo Carrington on Dynasty, Caitlin Moore on Spin City and Officer Stacy Sheridan on T.J. Hooker. She was born to William Robert Locklear and Diane, a production executive for Disney. She has a ancestry of German, English and Scottish.

Her personal life is full of ups and downs. Till now she has been married twice and both the time she got divorce from her husbands. She was married to her first husband for almost 7 years and was married to her second husband for almost 13 years. She has raised a beautiful daughter with her second husband. Currently, she is in a relationship with a man who is often cited as one of the best plastic surgeon.

He is the first husband of Locklear, who is a drummer of an American rock band Mötley Crüe.

He is the second husband of Locklear, who is a guitarist of the American rock band Bon Jovi.

She is the only daughter of Locklear, who now is a professional model.