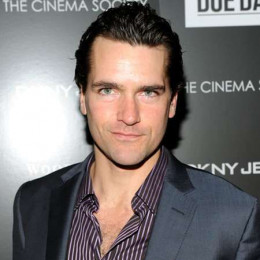 An American actor who is well known for his role as Grayson Kent on the Lifetime series, Drop Dead Diva. He majored in international economics and management information systems from Baylor University. He used to do job in finance industry. The year 2007 seemed a lucky year for him as he got his first role in the movie named "The Mist". In 2006 he appeared in some of the episodes of Inspector Mom. He got his first lead role in the movie named "A Bird Of The Air".He has also appeared in the movies like Have Dreams, Will Travel and Shorts.

He is already tied in knot with his longtime sweetheart. Together they make a very cute couple. Both of them seem to be very happy with other since till now no complication has raised in their relationship. There is no record of him dating other girls prior to marrying her which also proves that he is very loyal to his wife. Couple has not given birth to any child. Since he is maintaining very healthy relationship with his wife, he is not gay.

They dated dating each other since 2009 and got engaged in 2013. She is very gorgeous lady. Couple's pictures can be found in different sites.