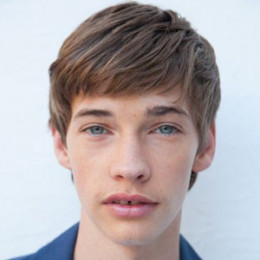 Jacob Seth Lofland, popular for his stage name as Jacob Lofland. He is an American actor who gained massive public attention in the Matthew McConaughey vehicle Mud when it released worldwide in April 2013. Moreover, He appeared as Aris in Maze Runner: The Scorch Trials. He also acted in the film Little Accidents, which aired in 2014 at Sundance Film Festival.

Moreover, He appeared as Aris in Maze Runner: The Scorch Trials. He also acted in the film Little Accidents, which aired in 2014 at Sundance Film Festival.

Jacob Lofland was born on July 30, 1996, in Briggsville, Arkansas, United States. He is the son of Debra Lofland and Billy Lofland. He belongs to American nationality and ethnicity wise; he is a White American.

Other than acting, Jacob Lofland also enjoys fishing, boating, hunting, and riding dirt bikes when he is not acting. He became interested in racing go-karts, after attending dirt track races with his family when he was 11 years old.  He spent his childhood in Briggsville with his family.

Jacob Lofland started his acting career after playing the role of Neckbone in 2012 film movie Mud along with Matthew McConaughey, Tye Sheridan, Resse Witherspoon, and Sam Shepard as well. After that, he has worked in a number of other movies including Little Accidents, Free State of Jones, and Go North so far.

Jacob Lofland is a successful young actor and is not married yet. He is only twenty years of age and as a rising actor, Lofland is highly devoted in his professional life. He doesn’t share any information about his personal life in front of the social medias.

However, scrolling down his Instagram page, Jacob Lofland is seen being cozy with Wintney Powell. Moreover, they posted a lot of pictures hinting that they are a couple. Therefore, we can assume that Jacob and Powell are dating each other. But, he has not mentioned or confirmed anything about his love affair yet.

Other than that, Jacob Lofland enjoys fishing, boating, hunting, and riding dirt bikes in his leisure time. Besides, he is active on Twitter and Facebook as well.

Jacob Lofland earns a significant amount from his acting career, and his net worth is believed to be more than $1 million. Jacob featured in the 2012 American coming of-age-drama movie Mud whose production alone cost $10 million, and it made huge box office of $32.6 million and was a successful film and Jacob must have earned a decent amount from it.