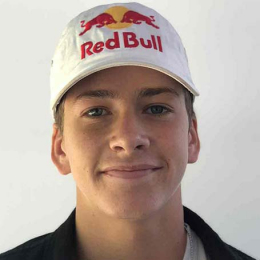 Jagger Easton is an American skateboarder who is famous for being the youngest contest who participated in the X Games. He is popular for working with many International brands including Red Bull, DC Shoes, Bones Wheels and many more. Eaton won many skateboarding competitions like Tampa AM, BoardrAm, Tampa Pro. The 18-years-old skateboarder is also recognized for dating the American model and singer Morgan Justus.

Personal Life of Jagger Eaton; Is he Dating Someone?

Jagger Eaton is currently dating the famous American model, singer, and songwriter Morgan Justus. The couple is private about their relationship and does not share much about their dating life in front of the media. Moreover, the duo first met in 2018 and started dating ever after.

Eaton is a family guy who gives priority to his family and prefers to stay a lot of time with them. He shares a good bond with his family but especially his mom is the light of life for him. The 18-years-old skateboarder is a mom's boy and shares a very special bond with his mom. Here take a look at his Instagram which he shared in the mother's day of the year 2016;

Happy Mother's Day mom! You are the light of my life! I couldn't have done it with out you! I Love you so much! #bestmomeveraward @shellbellwest

The Skateboarder is out of any dating rumors and also controversies about his professional life. Currently, he is busy practicing as well as competing in many skateboarding tournaments and is passing the days with his family as well as his partner. Additionally, the relationship between Jagger and her partner seems fluid as there is no sign of divorce between them.

Jagger Eaton's Net Worth; Know About his Skating career:

ESTONIA THANK YOU!!! Very blessed to be able to travel here and compete! Thank you @redbull for the amazing times, till next year!

Jagger started skating at the age of four, all thanks to his father who owns askateboard school named The Kids That Rip(KTR). Jagger trained in the school and competed in many skateboard competitions like X Games in Los Angeles, Bob Burnquist's Dreamland MegaRamp Invitational where he finished in the third place in the amateur division. Besides, he won Tampa Am competition held in Tampa in December 2014, BoardrAm held in Houston in February of 2015 and many more.

The Tampa Am winner attracted many international and famous brand from his skating skills and hard work. In fact, he is now sponsored by numerous brands including DC Shoes, Plan B Skateboards, Red Bull, Bones Wheels, Independent Truck Company, and KTR Skateboard School.

Go grab a pair of the EVAN SMITH SIGNATURE SHOE ... The absolute best skate shoe out there. @dcshoes @starheadbody #SOTY

On the other hand, the states' skateboarder also appeared on the television screen. In 2015 he was featured in an American comedy clip show Ridiculousness as himself in the 5.3th episode of the show. After that, he also got a chance to star as a host in the American docu-series named Jagger Eaton's Mega Life which was shown on Nickelodeon.

Take a look at the Interview of Jagger Eaton where he talks about X Games Minneapolis: