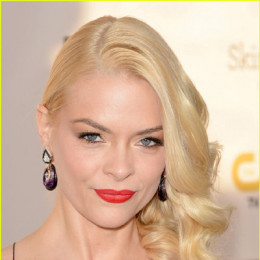 Jaime King is an American model and actress by profession. King worked in numerous movies and TV series from where he is making a great net worth and salary. Besides, she is married and shares two children.

Jaime King tied the knot to her boyfriend turned husband, Kyle Newman. They married in a private ceremony in 2007 attended by families and friends.

Some pics from our magical jaunt to The Wizarding World of Harry Potter today! The boys are in the midst of Potter fever and couldn’t have been more excited. #JamesKnight was doing his best intense Slytherin stare wearing his first set of house robes (emulating his favorite @t22felton) and #LeoThames was all about Neville Longbottom. He even got his first wand!

The husband-wife couple share two children and both of them are boys. Their first son, James Knight Newman born in 2013 whereas, the second son Leo Thames Newman was born in 2015.

The actress, Jaime King has an accumulated net worth of $8million. She is successful to grab a huge fortune from her acting career.

The star was born on 23rd April 1979 in Omaha, Nebraska. She is an American citizen and is of White ethnicity.

Jaime King and James King was the name given by her father Rober King and mother Nancy King when she was in childhood. Her mother was a former beauty queen. But unfortunately, her parents got divorced.

King had attended a modeling school named Nancy Bound’s Studios. Later on, she joined a home-study program of the University of Nebraska.

She is one of the world’s top fashion models. At the age of 16, she was a top model to appear as a cover girl for “The New York Time Magazine”. She had also been featured in the fashion magazine including Vogue, Seventeen etc. she began her acting career in 1999. She had also won Young Hollywood award in 2001 for New Stylemaker- Female.

After dating for two years Jaime got married to Kyle Newman who is a director, editor and writer. She is happily married.

She had a son from her husband named James Knight Newman. She gave birth to her first son at the age of 34.