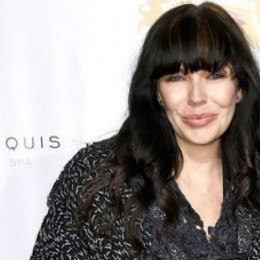 Jamie Wachtel is a famous portrait photographer and model hailing from Los Angeles. She is the third wife of the late American singer, musician, and songwriter Scott Weiland, the Stone Temple Pilots frontman who died of a drug overdose back in 2015.

Jamie Wachtel is probably single and she's not dating anyone after the death of her husband, Singer Scott Weiland. Hence, we presume she'll not have a marital affair again.

Scott Weiland's darling, Jamie has been married twice in her life. Her first marriage was to Scott Weiland, an American musician. Wachtel and her boyfriend turned husband, Scott tied a knot on 22 June 2013

The couple was together for only two years. They first met each other when Jamie was filming a Christmas music video I'll Be Home for Christmas. Once in an interview with Heavy.Com Scott talked about how blessed he was to meet Jamie. He said,

"I am incredibly happy as I met her. She is incredibly beautiful in every aspect and I guess we will marry soon. She is the greatest thing that happened to me in a long, long time."

The couple's intimate wedding ceremony was held in summer in their Los Angeles home attended by their close friends and families. The two were living a blissful married life until Scott's last breath. Jamie and her lover lived in the Laurel Canyon neighborhood of L.A. along with their pit bull rescues. The 12 Bar Blues singer died on a bus tour.

Previously she was in a relationship with Wolfgang. When she was just 16 years old she moved to Los Angeles in order to pursue her career in the field of modeling. There she met Wolfgang and was together with him. The duo was even blessed with a son.

How Much Is Jamie Wachtel's Net Worth?

Jamie Wachtel is a photographer and painter and she has amassed an impressive amount of net worth from her career. Her paintings are kept in Purchase and Shipping for sale and the painting costs range from $300-$1200.

She became a household name in the media after she married Scott Weiland, the popular singer who sadly died due to the drug overdose. Her husband, Scott was best known as the lead singer of the band entitled Stone Temple Pilots.

After the terrible death of her husband, she put her 2.7-carat white gold and diamond engagement ring on eBay for sale with a starting price of $8,000. She explained why she did that on the post on her Facebook page where she wrote,

"This is the ring Scott gave me when he first proposed to me. Eight months into this new chapter of my life, I need to part with it."

Jamie didn't give any details of the ring and the total amount of her net worth is under the review. She's sold many paintings online and she's a famous photographer, hence we can estimate that her net worth is in six-digit figures.

Jamie Wachtel was born in Canton, Ohio, the U.S to James and Karel Wachtell. She is referred to as Jimmy by her parents. From an early age, she was interested in photography and at the age of twelve, she got her first camera.

She moved to Los Angeles to pursue a career in modeling and got her first modeling project when she was just 16. Weiland's spouse went on to work as a model as well as a producer, photo assistant and studio manager with the number of incredible photographers in Los Angeles.

Jamie Wachtel is the third wife of Scott Weiland. The couple was together for only two years. They first met each other when Jamie was photographing a video named I'll Be Home for Christmas.