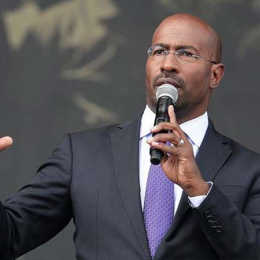 Jana Carter is a popular American entrepreneur, producer, director and board member of The Garden Church who caught the limelight after marrying the famous American news commenter and author Van Jones. She is popular for working as a director of Search for Common Ground's USA Racial Healing program.

Jana Carter's Personal Life: Who is her Husband?

Jana Carter is married to the famous American news commentator, author, and non-practicing attorney Van Jones. The couple lived together for two decades until something unexpected happened in their marriage. Despite being famous, the duo prefers to share less about their marital relationship and they are not much seen together in public.

The pair shared the wedding vows among their close friends and family in a private ceremony 2005. Moreover, the duo never shared information about their wedding ceremony.

The couple is blessed parents of their two children, both of them are boys. Their first child is Cabral Jones who is of 14 years as of now and their second son is Mattai Jones who is of 9 years.

Jana Filed for divorce against her husband Van Jones

Despite sharing a solid bond for over two decades the couple faced highs and lows in their relationship. They made a crucial decision to separate from each other in May of 2018 after 13 years of marriage. Furthermore, in September of the same year, Carter filed a divorce suit against her husband and requested the joint physical and legal custody of their sons and spousal support.

Van confirmed the news via an Instagram post where he captioned that divorce means the end of a marriage but not the end of a family.

The divorce of the couple is still not finalized and everyone is waiting for their marital report. In a statement with PEOPLE, he said,

"Though we have decided to end our marriage, we still love each other very much. We will continue raising our kids together, running our business together and supporting each other's growth! There is no beef or drama - just evolution."

It seems like the duo is just parting their ways to but will stick on the same road forever being good friends.

How Much is the Net Worth of Jana Carter?

Jana Carter holds an estimated net worth of $2 million. She is an active board member of The Grand church and made it easier to gather that fortune by working as a director, producer, entrepreneur, and social worker.

Jana is currently working as a board member of the Grand Church and is involved in many entrepreneurship schemes. Moreover, she is the owner of Kidpacking and also works as a producer and director of operations at Magic Labs Media. Besides, she also tried her hands in many occupations like journalism and activist.

Jana Carter is married to the famous American news commentator, author, and non-practicing attorney Van Jones. Despite sharing a solid bond for over two decades the couple was feeling highs and lows in their relationship. Therefore, they decided to separate from each other in May of 2018 and filed for the divorce in September.

Mattai Jones is the younger son of Van Jones and his wife Jana Carter. He occasionally appears on his father's social media posts.

Cabral Jones is the first child of Van Jones and Jana Carter. Details about Cabral is still kept private.