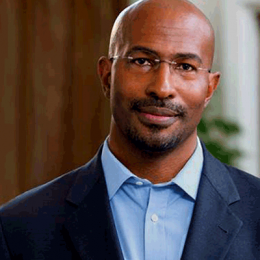 Anthony Kapel Jones also known as Van Jones is a news commentator, author, and non-practicing attorney. He is the president of a nonprofit organization named The Dream Corps. He also served as Special Advisor to President Barack Obama.

Jones was born on September 20, 1968, in Jackson, Tennessee, the U.S. Regarding his nationality, he is an American belonging to the Afro-American ethnicity. He is the son of Loretta Jean Jones and Willie Anthony Jones.

Jones and his twin sister Angela were born in Jackson about 90 miles east of Memphis. His mother was a high school teacher and his father was a principal at a middle school.

Jones grew up with his sister and spend most of his childhood days with his sister. His grandfather was a leader in the Christian Methodist Episcopal Church.

Jones is an American environmental advocate, CNN political contributor, and civil rights, activist. He is the president and also co-founder of Rebuild the Dream. He is also the founder of Ella Baker Center for Human Rights.

Jones started his career in 1992. He was brought to the city as a legal observer, as he was affiliated with the Lawyers’ Committee for Civil Rights.

Van Jones is married and has two children. He married his longtime girlfriend, Jana Carter. Together they are blessed with two sons namely Mattai Jones and Cabral Jones.

Jones was in headlines and highly criticized for his involvement with an organization named "Standing Together to Organize a Revolutionary Movement" and also for his support for a prisoner named Mumia Abu-Jamal who was sentenced to death for murdering a police officer.

Jones has earned a huge amount of money from his work. He has recently become one of the most talked about people after his speech on CNN. He has the net worth of $1.1 million.

She is very pretty. She is mother of two sons. Her picture along with family can be found in different sites.