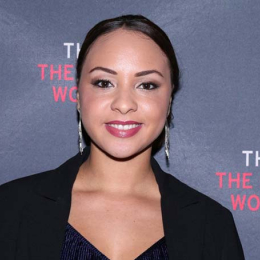 Jasmine Cephas Jones is one of those famous celebrities who grabbed the media attention even before coming out to the real world. She is famous for being the daughter of famous American television actor Ron Cephas Jones and British-born jazz singer Kim Lesley.

Jones is a popular Hollywood's award-winning actress known for working in the films and television series like Mistress America, Blindspotting, Blue Bloods and many more. The 29-years -the old actress is also recognized for dating American actor Antony Ramos.

Personal Life of Jasmine Cephas Jones; Is she Married?

Jasmine Cephas Jones is currently engaged to her long term boyfriend Anthony Ramos. The duo shares a good bond as they have been together for over four years. The pair is open about their relationship and started sharing their pictures together from a very early phase of their relationship.

The couple dated for over three years and finally shared the engagement rings on December 24, 2018. The duo is giving themselves more time to know about each other. They might already have felt the vibes of true love between them as they are engaged. Moreover, fans of the couple are eagerly waiting for them to take a step forward in their relationship and tie the knot.

"Cause they can write stories And they can sing songs But they don't make fairy tales sweeter than ours And they can climb mountains high into the sky But they can't take the world Oh, like we can take the world" - @johnnyswim I love you Jas 12/24/2018 Thank you for saying yes to writing stories together for the rest of our lives. I'm honored and Blessed to marry you. LEGOOO

Jones is out of any rumors and controversies as she's never spotted with any other men except her soon to be husband Anthony. Additionally, Jones is also a career oriented person and works with both heart and soul in her acting campaigns.

What is the Net Worth of Jasmine Cephas Jones?

The 29-years-old actress is currently working in the upcoming 2020 romantic drama film named The Photograph. She made her film debut as a professional actress in 2013 by appearing in the film named Titus portraying the role of Jessica.

Since then, she appeared in many films like Mistress America, Blindspotting, Monsters and Men, and Dog Days. Among all of them, Blindspotting collected a total of $4.9 million against the budget of $1.2 million.

Thank you @revolve for making a girl feel pretty on her gig. : @annyasantana #revolveme

You May Also Like: Elaine Devry's Net Worth & Personal Life