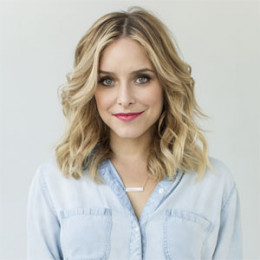 Jenny Mollen, 38, is an American actress and New York Times bestselling author most known for her role as Nina Ash on the famous TV Series entitled Angel. Further, she is known for her role in Return of the Living Dead: Rave to the Grave. Mollen married actor Jason Biggs on April 23, 2008, in Los Angeles, California.

Jenny Mollen was born on May 30, 1979, in Arizona, U.S. She was brought up in Arizona along with her siblings. Her father is of Jewish descent and was raised in Jewish culture. Her father, Art Mollen has published more than five books on health-related topics and has featured as a health expert on The Oprah Winfrey Show and other numerous media outlets.

Mollen began her professional career in 2005, where she announced in an interview to perform in a play where she wrote about her dog at London.

She wrote the short movie Kidnapping Caitlynn, directed by Katherine Cunnigham Eves where she featured along with other two actors, Julie Benz and Jason Biggs. In 2013, she signed with St.Martin’s Press to write a book of comedic essays, I Like You Just the Way I Am. The book earned the position of top ten in the list of The New York Times Best Seller list for E-book and print non-fiction on its debut in 2014.

Additionally, in 2016 it was announced that ABC Digital obtained a single-camera comedy written and starred Mollen based on her NYT Best Seller I Like You Just The Way I Am. Along with her husband, Jason Biggs, she also co-starred in a comedy movie Amateur Night.

Mollen is happily married. She tied the knot with actor Jason Biggs at Los Angeles in 2008 and the second ceremony was held in Napa Valley, California. The husband-wife welcomed their first child named Sid on February 15, 2014.

Recently on October 2, 2017, they were blessed with their second child born at Lenox Hill Hospital in New York City. The baby boy weighs 7 pounds and is 20 inches tall in height.

Jason,38 and Mollen, 37, shared videos and pictures related to the birth of their second child in different social medias where they both reveal about eating the placenta.

The Return of the Living Dead: Rape to the Grave actress is living a lavish life along with her husband and two children. Mollen's net worth is estimated to be around $1 million as per some online sources.

The proficient actress Mollen is married to a popular actor Jason Biggs. They exchanged vows on April 23, 2008. The couple seems to be happy together without any signs of divorce.

The happily married couple was blessed with their first baby boy on February 15, 2014. The baby boy was named as Sid Biggs.

The husband and wife welcomed their second baby boy on October 2, 1017. The baby boy was named as Lazlo Biggs.