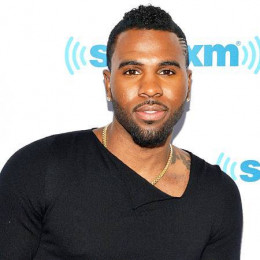 An American singer, songwriter, and dancer Jason Derulo who became worldwide famous due to his double-Platinum hit, 'Whatcha Say,' which samples the Imogen Heap song 'Hide and Seek.' He was born to Haitian parents. He attended opera and ballet at the Dillard Center for the Arts. When he was just 16 years old he started to write songs for Diddy and Danity Kane. He has already wrote songs for famous artist like Birdman. In 2011 he released his second album, Future History which charted on no.1 on the UK R&B Charts. He has been awarded with Choice R&B Track for his singles "In My Head".

According to the source after she forced him to marry her he broke up with her. After his break up his name was shortly linked with the model but it didn't gain so much popularity and he never disclosed that relationship in public.

Jason Joel Desrouleaux was born on 21 September 1989 in Miramar, Florida to Haitian parents.

He achieved eleven platinum Singles including "In  My Head", "Whatcha Say", "Talk Dirty", and "Wiggle".