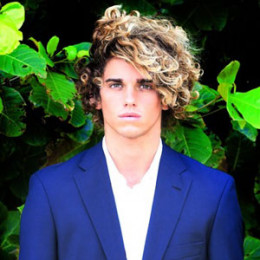 Jay Alvarrez an internet sensation was born on July 5, 1995. He was brought up in Oahu, HI. He has over 900,000 subscribers on YouTube and many of his music videos have gained over 5 million views. He has over 5.1 million followers on his Instagram and nearly 60,000 followers on Vine.

The super-hot Instagram star Jay Alvarrez is a music producer, model, and social media star. He grew up in Oahu, HI with his parents. He belongs to white ethnicity and holds an American nationality. At the age of 16, in August 2011, his mother passed away.

The 21-years-old Jay raised along the ocean and coastline. He completed his high school from his birthplace. At the age of 14, he made a tattoo inside his bottom lip that reads “LETS LIVE”.

The social media star, Jay Alvarrez made a name for himself through photography and became friends with famous photographer Bryant Eslava.

Jay also starred in the campaign for Ralph Lauren’s 'Ralph love fragrance.' He has also produced music and is on Soundcloud as jayalvarrez. Jay is well known for documenting his travels and thrilling sports adventures on YouTube, Instagram, and Vine.

Alvarrez loves house music and spent time working on a project along with Kygo in Ibiza. He really likes dogs as Jay often posts pictures on his Instagram account. He is sports enthusiast who loves to skydive and surf.

He has over 900,000 subscribers on YouTube and many of his music videos have gained over 5 million views. He has over 5.1 million followers on his Instagram and nearly 60,000 followers on Vine.

Besides, Jay has been cast for Deported in 2017, as an actor.

Jay Alvarrez is an unmarried man. However, he has been dated few girls. He firstly dated Chase Miller, a model. After sometimes they broke up their relationship.

After he broke up with Miller, in 2014, Jay began dating Alexis Ren, a model and internet sensation. Ren is more popular on Instagram than Jay. Unfortunately, the lovebird broke up last year in 2016.

Jay Alvarrez has an estimated net worth of $1.5 million dollars. He earned the majority of his income through his hard work in social media and by endorsing brands. He is also an owner of  Lamborghini Gallardo.