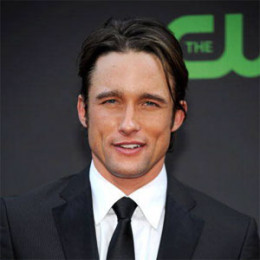 American actor, Jay Kenneth Johnson, is known for his portrayal as Philip Kiriakis in daytime soap opera, Days Of Our Lives. Johnson also appeared on Fox TV's North Shore (as Chris Remson) and CBS's The Young and the Restless. From 2007 -2012, Johnson has been in a relationship with American model and actress, Shelley Hennig who is also a beauty pageant titleholder.

Jay Kenneth Johnson was born on 24th February 1977 in Springfield, Missouri, U.S. to Ken Johnson and Janice Johnson. He belongs to White-American ethnicity/race and holds American nationality. He grew up along with his siblings, Jenna and Jeff.

In 1995, Johnson went to Kickapoo High School. Later, he joined the Missouri State University; majored in Business and theatre. He then moved to Los Angeles to pursue his acting career.

In 1999, Jay Kenneth Johnson cast in American daytime soap opera, Days of Our Lives as Philip Kiriakis. The same year, he starred in American television soap opera, The Young and the Restless.

In 2000, Johnson made a guest appearance in television series, Miami 7 as Ethan. After that, he got an opportunity to work with popular actor Aaron Spelling in Hotel (2003).

From 2006–2007, he played a recurring role in an American medical comedy-drama television series, Scrubs as Dr. Matthews.

Besides his acting career, Johnson is also a lead singer and a co-songwriter for the band Solid Jones. His other band members include 'Dirty' Dave Harp, Bryan Powers, Dave Green, Rick Steff, and Kevin Houston.

Jay Kenneth Johnson is single at present. Previously, he dated an American model and actress, Shelley Hennig. The pair began dating from 2007 and after five years of togetherness, separated in 2012.

Jay Kenneth Johnson has cast in various movies and TV series. He earned a decent amount of money from both acting and singing career.

NBC soap opera, Days of Our Lives is a long-running American television series from where he collects an impressive sum of amount. However, his salary from the series and his net worth is not public.

According to some online sources, his fellow cast members from Days of Our Lives including, Greg Vaughan has a total net worth of $2 million and Daniel Cosgrove has $3 million. It is also reported that the soap opera actors get paid a minimum $1400 per episode, and their average yearly salary is about $89000.

With the data, it can be assumed that Jay Kenneth Johnson has an estimated net worth not less than a million.