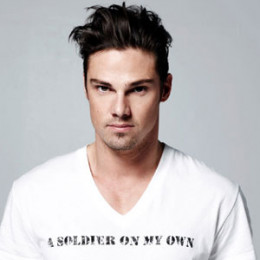 Jay Bunyan, better known by his stage name Jay Ryan, is a New Zealand actor. He is famous for his role Jack Scully in Reg Watson’s Australian soap opera, Neighbours. Also, he is the winner of Equality Ensemble Award for Outstanding Performance by Ensemble in a miniseries for the series, Top of the Lake. He is in a love relationship with Canadian-New Zealand writer, Dianna Feumana and is blessed with a baby girl, Eve. The lovebirds are not yet married but are in a live-in relationship.

Born on 29th August 1981, Auckland, New Zealand, Jay Ryan belongs to white ethnicity. He was raised by his parents along with his sister who belongs to half Tongan descent.

From early days, he was passionate in acting and started his career when he was 8. He used to perform as a clown entertaining young children at the supermarket on the weekends.

Jay began his career with the spin-off series, Hercules: The Legendary Journeys, developed by Robert Tapert, in 1998. The series starred Ryan Gosling, Dean O’Gorman, and Chris Conrad. He played supporting roles in the TV series such as Xena: Warrior Princess, The Tribe and Being Eve.

When he auditioned for roles in Los Angeles, he changed his name as 'Jay Ryan' because of Bunyan sound too similar to a Bunion.

In 2002, he landed a lead role in Australian television soap opera, Neighbours, created by Reg Watson. The show not only rose his popularity among the viewers but also won him a nomination for Logie Awards for Most Popular New Male Talent.

After receiving popularity, he made his appearance in Television movie, Superfire where he portrayed the character of Dennis. In 2003, he was cast in Paul Hoen’s directed Disney Channel Original Movie, You Wish!, which starred A.J. Trauth, Spencer Breslin, Lalaine, Tim Reid.

Some of his popular TV series include Go Girls, Sea Petrol, Offspring, and Beauty & the Beast. His role as Mark Mitcham in the mystery drama television series, Top of the Lake, created by Jane Campion and Gerard Lee won him Equality Ensemble Award for Outstanding Performance by an Ensemble in a Miniseries in 2014. The series starred Elisabeth Moss, David Wenham, Peter Mullan, Thomas M. Wright, Holly Hunter, David Dencik, Ewen Leslie, Alice Englert, Nicole Kidman and so on.

He made his last appearance in the Canadian black comedy-drama, Mary Kills People, which starred Caroline Dhavernas. The series was premiered on Global on 25th January 2017 and was renewed for a second season on 5th June 2017.

Talking about Jay’s love life, he is dating his longtime girlfriend, Dianna Feumana, a Canadian-New Zealand writer. The couple supports each other, even in their work as well. The lovebirds are yet to decide about getting married. Currently, they are in a live-in relationship.

After playing several lead roles in the popular TV series, Jay has not only received popularity but also has earned a good sum of net worth. He has successfully drawn an estimated net worth of $4 million.

Born in March 2013, Eve is the one and only daughter of Dianna Feumana and Joy Ryan.