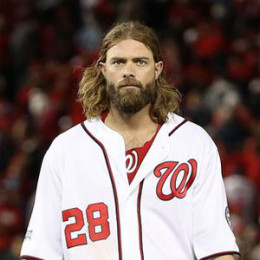 An American professional baseball outfielder, Jayson Werth is now a free agent. He began his professional career after joining the team, Toronto Blue Jays and later joined other various teams including Los Angeles Dodgers, Philadelphia Phillies, and Washington Nationals. He was even given the title of Unsung Star of the Year in 2009 in MLB's This Year in Baseball Awards. Apart from the professional life, he is currently married and has two children.

Jayson Werth was born Jayson Richard Gowan Werth on 20th May 1979 in Springfield, Illinois. His parents, Jeff Gowan (a collegiate football and basketball player) and Kim Schofield ( a competitor of US Olympic Trail in the long jump) raised him along with his siblings Hannah Werth and Hillary Werth.

He is of White-American ethnicity. Werth attended Glenwood High School.

Right from school days, Werth used to play baseball and was even playing for the youth traveling teams in his hometown. After several tours with the team, he then joined Springfield Flame where he along with the team won the state and Midwest Regional and became third in Sandy Koufax World Series in 1993.

Impressed with his fantastic playing skills, he was selected as one of the players of the U.S. Junior Pan Am Games and his team won the state championship in 1996 with 15 home runs in 31 games. Later, he planned to play as a college player for the University of Georgia, instead played for Baltimore Orioles, an American professional baseball team, after being drafted in the first round in the 1997 Major League Baseball draft

Werth’s professional career began after signing with the Toronto Blue Jays playing as an outfield. Two seasons later he was traded to Los Angeles Dodgers for Jason Frasor in 2004.

On March 2, 2005, while training he was hit by a pitch from A.J Burnett which broke his left wrist. Despite that, he managed to play 102 games with seven home runs. In 2006, he signed a year contract- $850,000 with Philadelphia Phillies.

Werth again faced another wrist injury in 2007 while playing against Chicago Cubs. He then began the season with Geoff Jenkins in the right field. In 2008 he had a career night playing against Blue Jays. He hit a grand slam including three home runs in a game. During the match, he made the highest home runs, and his team won the second World Series title.

Playing for almost one year with the team, he extended the contract for two years more in 2009 with an amount of $10 million. In the same year, he made his career walk-off against Jeff Samardzija in the 13 innings and winning the match for his team.

Moreover, in the 2009 National League Championship Series, only Werth hit a seventh innings home run which led his team to a victory 10-4 for which he was even awarded Unsung Star of the Year in MLB’s This Year in Baseball Awards.

Playing several years with Phillies, he then signed seven years contract-$126 million with Washington Nationals in 2010 which made it the 14th richest contracts in the history of the baseball. In the same year, he announced his jersey number as 28.

In 2011, he made 58 runs batted in with 20 home runs and a 232 batting average that became the highlight of the year. In 2012, he injured his wrist for the third time while playing against his old team, Philadelphia Phillies. After taking almost three months of recovery time, he finally made a comeback and earned his career’s highest batting average of a 309 and a 388 OBP.

The famous player is committed to his wife, Julia Werth with whom he tied the knot in 2000 after dating for few years. The couple is very private about their life. They rarely appear in public.

They are parents of two children, but their names have been kept a secret from the media. Apart from that, he was rumored to be dating Chase Utley’s wife, Jennifer Cooper in his past, but no confirmation came regarding that, which suggests the news was false.

Besides the relationship issues, Wreth was arrested and spent five nights in jail in accusation of driving 150mph on the Capital Beltway in 2015. Later on, he was released from jail after a guilty plea and certain bail amount.

One of his contracts was even listed as the 14th richest contract in the history of baseball as he took $126 million in 2010 after signing a seven years contract with Washington Nationals.

He even owns a grand house in LA and a luxurious car, Porsche GT3 RS.

After dating for few years, the baseball player, Jayson Werth married his wife, Julia Werth in 2000. The couple is still together with no such buzz about their divorce and extramarital affairs.