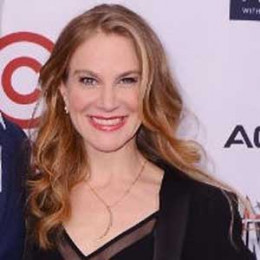 Jeannie was born on 9th March 1970 as Jeanne Louise Noth in Milwaukee, Wisconsin. She is the daughter of Louise Noth and Dominique P. Noth, a film critic for the Milwaukee Journal. Dominique also used to work for the theater and currently reviews show for UrbanMilwaukee.com.

Gaffigan was raised along with her eight siblings. Two of her siblings- Patrick Noth and Paul Noth are engaged in the film industry as actor and writer.

Gaffigan started her career as a stage actress from a regional theater. After that, she shifted to New York and also worked in several small theaters and comedy groups.

Jeannie also acted in fiction drama, Ghost Story as Anne Coast in 1997. Moreover, she also began her career in writing and producing comedy with one of her friend and her current husband, Jim Gaffigan. Right from that time, she started assisting Jim in all in his comedy specials.

Gaffigan co-wrote an animated short series, Pale Force with her brothers, Paul North (a cartoonist) and Patrick Noth (a writer and composer) for which she was nominated an Emmy Award. Jim Gaffigan and Conan O' Brien starred in the series.

In 2003, Gaffigan produced American sitcom series, The Jim Gaffigan Show which was broadcasted on TV Land Network and won Christopher Award for the show in 2016. Later on, she appeared in a long-hour radio puzzle game show, Ask Me Another, hosted by Ophira Eisenberg. She also won Eloquentia Perfecta award from Fordham University fo her work in Television and Media

Jeannie Gaffigan married to Jim Gaffigan on 26th July 2003. Jim is an actor, comedian, director plus producer. The couple have directed and produced several episodes of The Jim Gaffigan Show.

Gaffigan once suffered from a serious brain tumor. During that time her husband along with her children were by her side. On 2nd May 2017, she underwent a long nine-hour surgery. She is now fit and healthy without any health problems.

Jeannie has not revealed her net worth and salary to the media but looking at her sucess she probably has a seven-figure net worth. Talking about her husband, Jim Gaffigan, he has an estimated net worth of 6 million.

Jeannie is also involved in the marketing campaign of 2017 Chrysler Pacifica, a minivan produced by Chrysler brand and designed by Irina Zavatski and Winnie Cheung with husband, Jim Gaffigan.

Jeannie Gaffigan and Jim Gaffigan married on 26th July 2003. The couple is involved in the marketing campaign of 2017 Chrysler Pacifica. They have 5 children together.

Jack Gaffigan is the first son born in 2006 to Jeannie Gaffigan and Jim Gaffigan.

Katie Lousie Gaffigan was born on 10th May 2009 in New York.

The adorable, Micheal Gaffigan was born on 19th June 2011 as fourth child in the family.

Patrick Gaffigan is the youngest of five children of Jim Gaffigan and Jeannie Gaffigan. He was born in 2012.